The Mythical River Saraswati – The life Fuelling River of India

The Indian population have always worshipped the river systems that run across the entire subcontinent. These riversides have been host to the earliest civilisations in the world. Having found its mention in the important Hindu text of Rig Veda this river plays an important role to Hindus. the history of this river is very tumultuous and its location is reported to have changed over a period of time. rig Veda mentions the river to be in between Yamuna in the east and Sutlej in the west while in later Vedic texts it is mentioned that the river had dried up into a desert. Whatever the history of Saraswati river is, it does not lessen the importance in a religious and holy context. 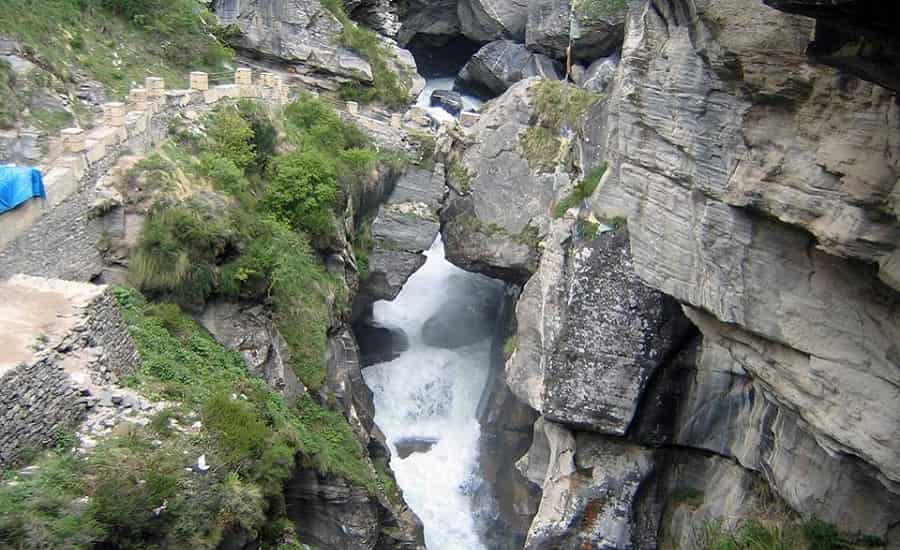 The river Saraswati is one of the tributaries for Alaknanda river whose source can be traced back to the grand Satopanth glacier and Bhagirathi Kharak glacier. Flowing through tight spaes in between the mountains this river meets Alaknanda at Keshav Prayag which is located close to the last village of India on the China border. Once the confluence takes place with Saraswati river, Alaknanda merges with Ganga in Devprayag which is then named Bhagirathi. One of the most popular tourist spots is a natural stone bridge built across the river called Bhim Pul in Mana which can easily be visited during Badrinath visit since it is situated at a mere distance of 3 kms from Badri Vishal.

The holy river makes its way through the Village Mana in Chamoli district and there is local transportation services available that goes up till Mana and from here you will be able to go on a short hike to Saraswati.

By Road –due to its location just ahead of Badrinath temple this river can be visited by following the same route as that for Badri Vishal temple. You can get on any local, state-run or private traveler from Delhi, Haridwar, Rishikesh, Dehradun, Nainital, etc. the roads are well connected and in very good condition but it does get jam-packed during the peak pilgrimage season.

By Rail –the closest railhead for Saraswati river is located in Rishikesh which is located at a distance of around 300 kms. From here you can decide to hire a cab or get on a state bus which will drop you off at Badrinath bus stand. You can even get a place on the shared jeep services here.

By Air –the closest airport is located at a distance of about 311 km in Dehradun i.e. Jolly grant. This airport caters to a number of flights from all over India like Delhi, Mumbai, etc. you can follow the same routine as the one mentioned in Rail i.e. hire a cab or get on a state bus which will drop you off at the main town of Badrinath.

Current Course of the River

As per the research and course study of the river, it is shown that the river used to once flow in the Thar desert region. This river which has been referred to as the mother of rivers in Rig Veda has been identified as the present day dry bed of Ghaggar in Haryana and Rajasthan. The course of the river has been agreed to change and shift its course continually and thorough advanced satellite imagery the scientists have confirmed that this river gradually shifted its course towards the west. Investigation of the field by the researchers have revealed that the areas through which the river used to flow in the past still support lush green and thriving vegetation even during the hottest summer days in Thar. In fact, some of the wells that are dug out have yielded water at just 30 to 40 meters of digging.