Rising from the majestic Himalayas and flowing onward to Bangladesh the holy river Ganga is the life-giving river along with being the longest river in India. The river gushes its way to discharge into the Bay of Bengal. This river is the most sacred river in the subcontinent and the people her worship it and utilise it in their everyday life. The fact that Hindu devotees take holy dips in it and use it for Asthi Visarjan and Pind Daan ritual makes it one of the most celebrated and holy rivers. From the Mountains of Himalayas through the plains of Rishikesh to the sacred town of Varanasi and to its exit point of the Ganges delta in the region of Bengal, the river flows through majestically. 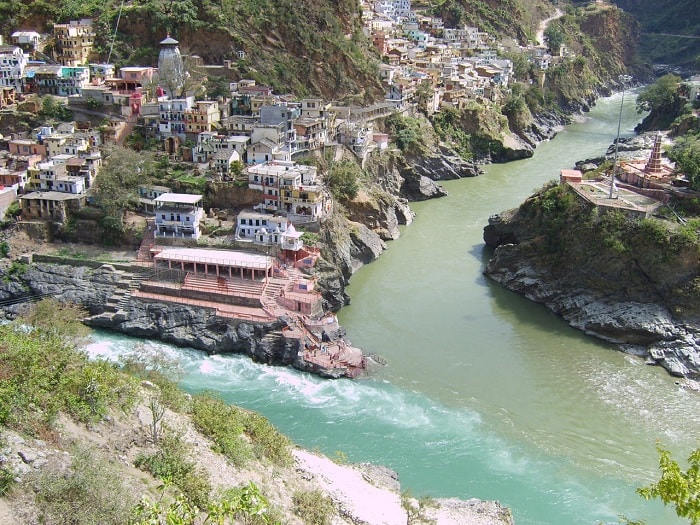 Course of the River

The main head stream source for Ganga can be traced back to Bhagirathi River flowing our of the Gangotri / Gaumukh glacier in the state of Devbhoomi, Uttarakhand. This glacier sits majestically on an elevation of 3,892 metres above sea level and the Bhagirathi river meets Alaknanda river in Devprayag to form the Ganga River. This river leaves the mountains and hits the plains on the point which is marked by the holy twin towns of Rishikesh and Haridwar is located forming the indo – Gangetic Plains. As the holy river ganga flows downstream it changes its direction numerous times and is finally joined by several other tributaries of rivers like Ramganga, Tamsa and Gandaki rivers. Some of the important cities along the river are Allahabad, Varanasi, Kolkata, Chunar, Mirzapur etc. the river flows out of India and right into Bangladesh where the main branch here is known as Padma river which further goes downstream to join large rivers like Meghna and Jamuna. Before entering the Bay of Bengal the river forms the world’s largest delta known as Ganges Delta which is known as a very high sediment laden area that covers an area of 59,000 sq. km.

The Ganga river flows down the Southern end of the grand majestic Himalayas on the Indian end and the Tibetan autonomous region in China. The northern Uttarakhand region witnesses the birth of 5 different headstreams namely Bhagirathi, Alaknanda, Mandakini, Dhauliganga and Pindar. The volume of the river ganga increases due to the fact that it receives a number of tributaries while simultaneously entering a heavy rainfall region which causes flooding in some settlements in the banks of this river. From Haridwar and Rishikesh Ganga makes its way through Uttar Pradesh to Allahabad before entering Bihar where its main tributaries include Gandak and Kosi. West Bengal is the final state the river enters before entering into Bangladesh and joining Mahananda from the northern end.

As indicated in the historical writings of 16th and 17th centuries the area surrounding Ganga and Yamuna were densely populated with thick green forests supporting a thriving culture of plants and animals like elephants, buffalo, bison, rhinoceros, lions, tigers etc. these animals used to be hunted here. Most parts of the original naturally occurring vegetation has disappeared due to climate change and commercial crop cultivation for the ever growing population of India. Only in the Sundarban region will you be able to explore and witness some of the vast varieties of animals like royal Bengal tigers, crocodiles, marsh deers etc. fishes are also a largely occurring population in this river water especially in the delta region. The Ganges Brahmaputra basin is also home to the famous Ganga dolphins which had once been endangered and are now making a comeback. Exotic birds can also be viewed at the banks of these rivers like – kites, partridges, fowls etc.

The entire length of Ganges is worshipped by Hindu for being a holy and sacred source of life. Hindu devotees take holy dips in the water of Ganga, pay homage to their bygone ancestors, and offer flowers and Diyas to the holy river. People take the holy water in jars back home and one of the most defining features of this water or Ganga jal is that, it never goes bad. An important Hindu pilgrimage called Kanwar Yatra requires Kawariyas or the people carrying the Kawar, to take the empty jars and make their way up to get Ganga Jal from Haridwar, Rishikesh or even till the source of Ganga at Gaumukh. This goes on to show the religious importance of the river in the lives of the people living alongside it. The significance also lies in the fact that it is believed that the river is sent from the heavenly realm to the earthly realm via the matted hair of lord Shiva after king Bhagirathi has performed deep penance to please goddess ganga. Making it even more important.

This mass Hindu pilgrimage site takes place every 12 years in 4 different hubs of Ganga rivers at Allahabad, Haridwar, Ujjain and Nashik. Ardh Kumbh also takes place every 6 years at Allahabad and Haridwar. The Maha Kumbh Mela which is held at Allahabad takes place once in every 144 years which is a huge deal among the Hindu Indian population. The puja ritual involved in Kumbh is taking a holy dip in the waters of Ganga while other activities include religious discussions, devotional Chantings, mass feeding etc. it is considered to be one of the most auspicious and sacred pilgrimages of India. This event is attended by lakhs of devotees who make their way from all over India and other international places to pay ode on this religious day.

Despite holding immense religious significance in the hearts and beliefs of the Indian population, sadly it is also one of the most populated rivers in the world. This is due to the rapid growth in industrial as well as human waste. India is a population of more than 1 billion people out of which 400 million people live in the Ganges river basin, which means that all their waste and sewage gets dumped into the river directly. There is little to no regulation regarding Industrial practices in India so as the population grows so will the industries. Large amounts of wastes from tanneries, chemical plants, textile mills, slaughterhouses etc. are being dumped into the river directly from here. immediate action should be taken to avoid making the current situation worse.