Mana Village – The Last village of India in Uttarakhand

Home » Mana Village – The Last village of India in Uttarakhand

The internet is filled with citations of Mana village as ‘India’s last village’. Could there be another aphorism that draws more eyeballs? The quaint village is located quite close to Badrinath shrine, and its inhabitants derive most of their meager income from what the pilgrims and tourists spend on its many attractions. The village is so much more than merely being a geographical or political speck upon Indo-Tibetan border. Read along to find out the riches of its history, geographical treasures and all that you ought to know before you head on to relish in the magic it weaves for its onlookers. 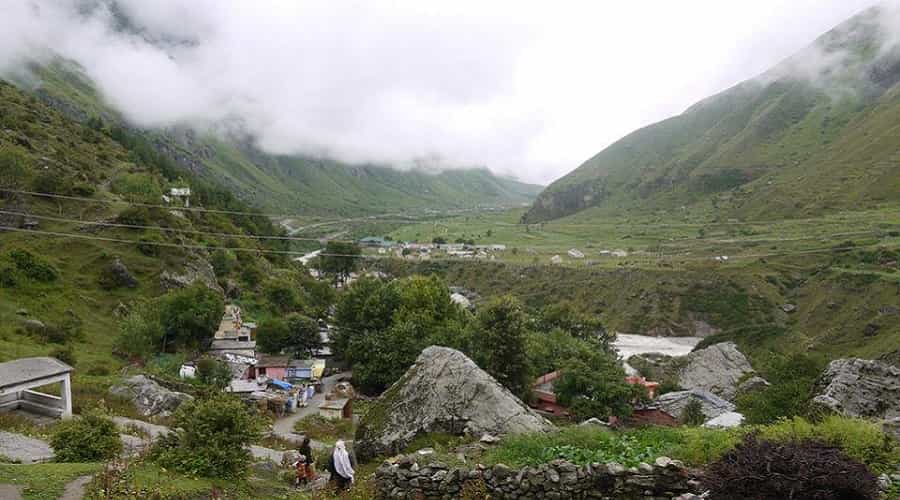 Mana is inextricably linked to Badrinath. The major financial sustenance of the village does of course from the pilgrims who include the village in their itineraries. Also, the villagers are closely associated with the rituals of Badrinath dham itself. One endearing custom is the villagers offering a shawl woven by the village girls to Badrinarayan before the shrine gets closed for darshan during winters. Most of its villagers lead a semi-nomadic life. They are said to belong to the Bhotia tribe, and were involved in Indo-Tibetan trade in the days of yore.

‘Mana’ is said to have been a remnant of its previous name ‘Manibhadra Ashram’. In fact, the Yaksha god of Manibhadra, who supposedly resides at Keshav Prayag, the site of confluence of rivers Alaknanda and Saraswati below the village is said to be the patron God of the entire village.

The village traces its history to the era of Mahabharata (Dwapara Yuga). One of the most dramatic episodes of Mahabharata is its scenes of Swargarohini of Pandavas, rather their ascent to heaven. Pandavas, after winning the Dharma Yudhha in Kurukshetra and annexing their rightful kingdom, are said to have given the reins and rights over to their successors in due time to seek reparation for their sins in the war. This paved the way for their engaging in monastic spiritual practices to incite their spiritual transfiguration. The final stage of their renunciant vanaprastha had them recognizing the approaching moment of their leaving their mortal bodies and ascent to Swarg and walking across the village’s trail, across the Saraswati’s mighty stream, up the Swargarohini peak.

It is believed that Pandavas passed through Mana village on their journey of ascent to heaven. In fact, the presence of ‘Bheem pul’ in the village testifies to the same. Tread along the village through which the Pandava brothers and their beloved wife Draupadi walked past leaving behind their residual attachments to human life. In fact, one is allowed to only walk through its premises. Vehicles are to be left outside its contours.

Its association with Mahabharata does not end here though. The very creative conception and inscription of the epic is said to have been done by Ved Vyas, along with the assistance of Swayam Sri Ganesha, is said to have taken place here. As per the legend, Brahma asked Ved Vyas to seek the help of Sri Ganesha to pen the creative masterpiece down. The divine scribe agreed to the saint’s request, but not without indulging in one of his playful tantrums. He would only write as long as Ved Vyas did not cease his narration at all, if he did the god would cease his participation in the project as well. To which Ved Vyas made a counter condition of Ganesha having to truly comprehend what is being written down. This must have enabled the saint to prevent Ganesha’s focus to deter away from the epic poem and not seek excuses to leave it half-way.

The beautiful village falls within Chamoli district of Uttarakhand. It is just a 3 km drive from Badrinath temple. National Highway 58 begins from the village itself connecting it to Delhi via Badrinath, Haridwar, Meerut and Modinagar.

Well, we can’t stress this enough. Let your walking shoes go wild in its terrain. Park your vehicles outside its boundaries (which you are required to) and explore the rustic realm and even cross over into the epic era in one of your strolls. 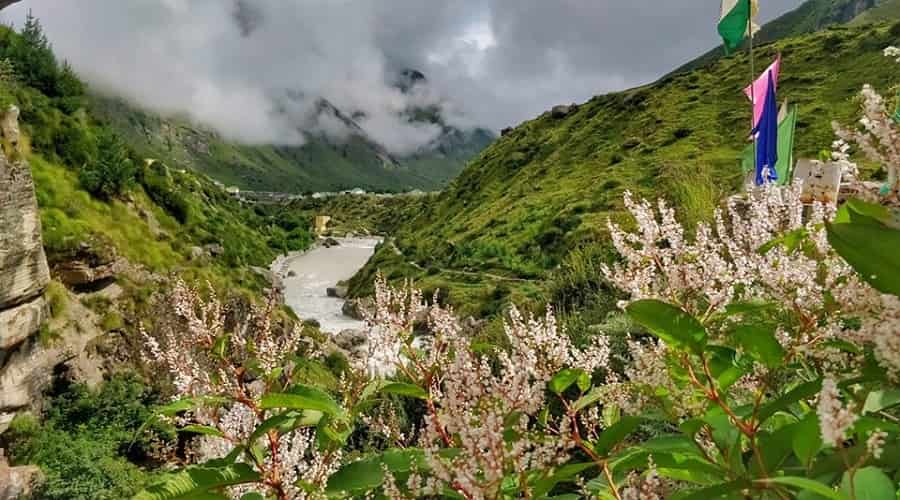 One can’t help but wonder at the divine coincidence that lead River Saraswati considered as an embodiment of Goddess Saraswati, the Shakti behind all creative energy (especially the written word), knowledge and intelligence, to flow alongside the soil that held the sacred ground for the creative download and transcription of the 18 puranas and the great epic of Mahabharata by Vyas. The river that gushes out of her mysterious subterranean chamber lends the world a quick Darshan of her powerful current and quickly merges with Alaknanda downstream. 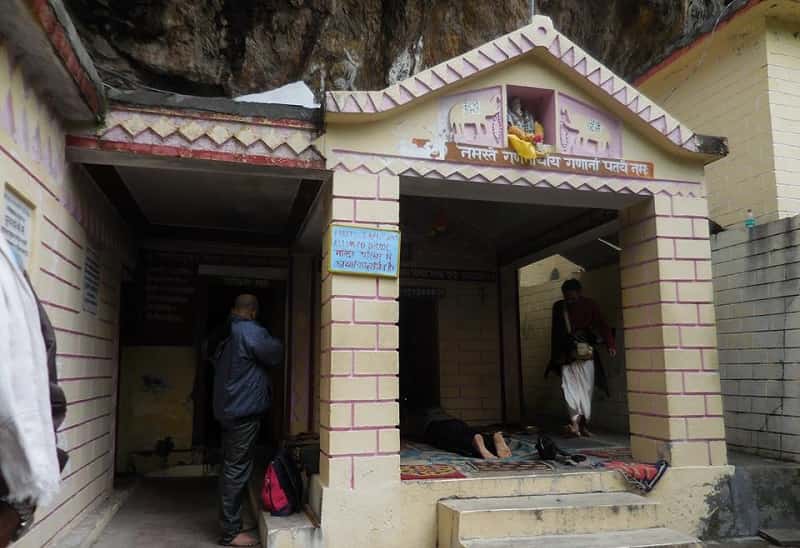 These are said to be the actual sites at which the epic is said to have been written down. These are the major tourist attractions in the village.

The many, many ‘last Indian shops’! – Well, what started out as a creative campaign to promote one shop later turned into a rather funny story with many shops using the same tagline of ‘India’s last shop’ across the terrain of Mana Village. Don’t forget to try the combo of hot tea accompanied with delicious Maggi while in Mana village. 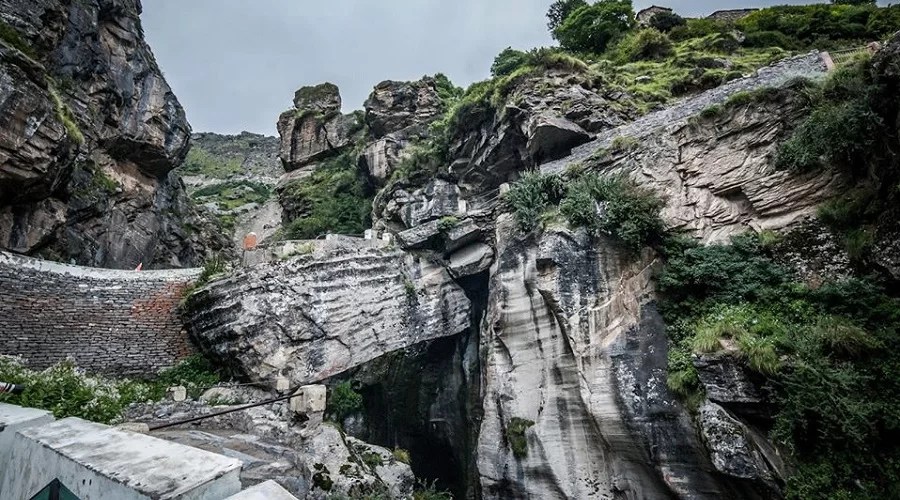 This natural bridge across Saraswati River is said to have been placed in its current location by the strongest of Pandava brothers, the Bhim. On seeing Draupadi’s distress at being unable to cross the stream he placed the huge boulder across the roaring river enabling a safe passage for his beloved wife.

Handcrafts of the Village

The women in the village are skilled artisans. You ought to unleash a bit of your shopping sprees while you are in the village. You will be able to find exquisitely designed carpets, shawls, sweaters, mufflers, scarfs, caps at good prices directly from its producers. This will support in bettering the lives of these village women and artisans.

The Trek to Vasudhara Falls

It is said the Vasudhara falls would not shower on sinners! In fact, this is another site near Mana village famous for its association with Mahabharata. It is like one cannot traverse its terrain without being reminded of the hundred references the village still carries of the beautiful epic. This 5 km trail which formed a part of Pandavas’ path to heaven will take you through heaven too, metaphorically of course! The myriads of flowers that line its path, the azure sky, the meandering stone-cobbled path and the majestic peaks whose silent presence accompany you will leave their imprints in your mind forever.

The Trek to Satopanth Lake 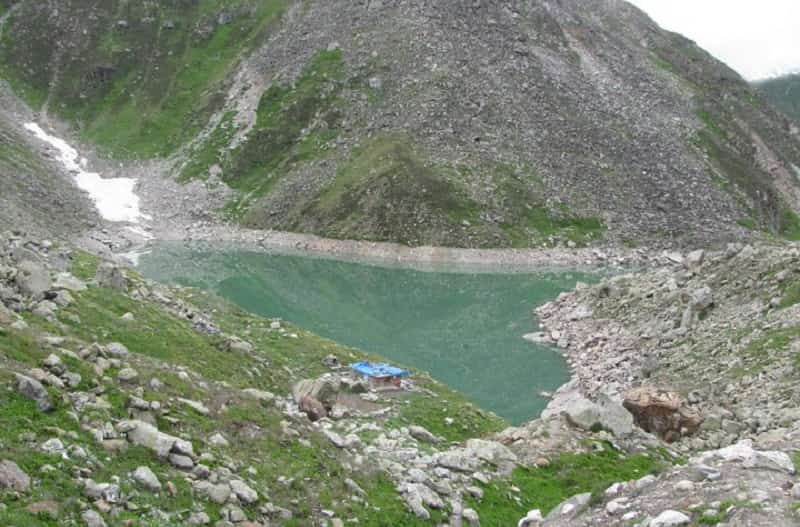 The trek till the holy Satopanth Lake also begins from Mana village. Mahesh, Brahma and Vishnu – the holy trinity of Divine Masculine is said to take bath in the pristine waters of this holy lake. What can one say of the endearing natural beauty Himalayan landscape prepares for you in this trail! The trek will take more than a day to finish, and one would be able to also enjoy the enchanting Sahastradhara falls! 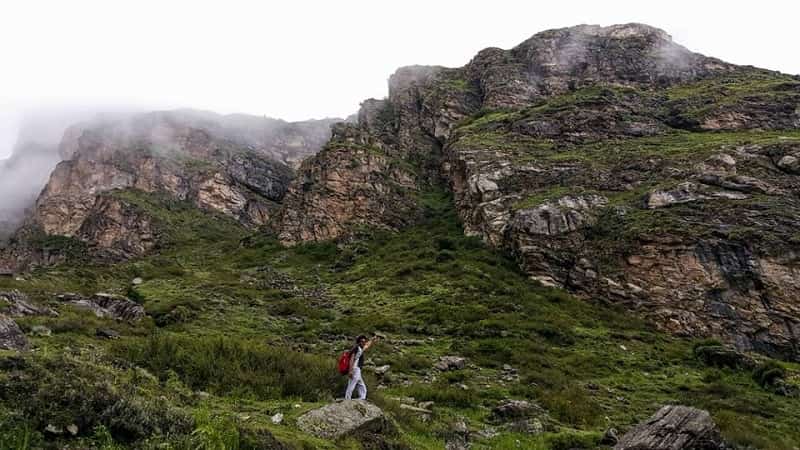 The trek till Charanpaduka fetches you to the rock that supposedly contains Lord Vishnu’s footprints. One can receive the astonishing views of Narayan peak and Neelkanth peak from the site. Also, the beautiful river of Rishiganga forms a waterfall quite near the cave. In short, the 3 km trek treads you towards quite a picturesque as well as religiously reverent site.

Between November and April, winter gets really chilly. In fact, most people migrate to warmer places during this time. Summer is rather pleasant and reveals the Himalayan village in all its beautiful glory.

You can either trek from Badrinath, situated about 3-4 km away from the beautiful town or employ a taxi to fetch you till here. As iterated before, the passage of National Highway through the village connects it to Haridwar, Meerut and Delhi. One can easily find bus/taxi operators that can take you here from Delhi/Haridwar.

Rishikesh railway station would be the closest to the village. The rest of the journey has to be traversed by road.

Domestic airport at Jolly Grant, Dehradun situated about 319 km away is the nearest one. One can also employ helicopter ride from Dehradun (Sahastradhara Helipad) till Badrinath helipad.