Every state in India is known for its uniqueness of traditions and beliefs and same is the case in the hill state of Uttarakhand. Folk dancing can find its ancestry in the ancient ages and has developed over time. Traditional dance here is known for being unique, colorful, vibrant and a very common occurrence. They dance to celebrate everything, from holy occasions and festivals to special days of the years and weddings among other important times. They do this while wearing their traditional attire which looks quirky and colorful in its own way and is notable for being extremely pleasant and appealing to the people on the plains. 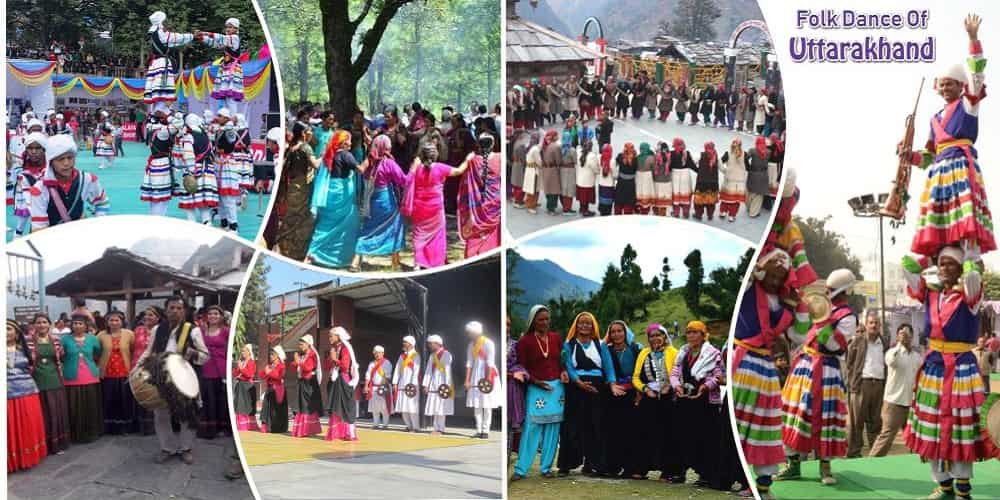 Uttarakhand folk dances are not complex or difficult to learn and perform yourself. This art form is performed in incredibly rhythmic synchronization and is a stunning sight to witness. Men and women get together to perform various dances and please the gods and goddess as a way of paying homage since they believe that if these dances are not performed properly then the gods would be prejudiced.

History of Dances of Uttarakhand

The old time beliefs and traditions of the ethnic tribes and people are deeply steeped into their dance forms and they represent their culture through this form. The art of dancing here owes its motivation to the enchanting mythological young dancing women who have made the snowy mountains their homes and are depicted in the form of Paries.

But who are these paries? Some people say that these dancing girls are the souls of the young single girls who had died without any cremation procedures; they were also believed to be the daughters of the evil king Ravan who had handed them over to Shivji as hand maidens. Another tradition regards them as a part of the legend and traditions of Krishna and depicting them as Gopis or ‘celestial dancers’ with Krishna Ji.

No matter what history says, dances here possess their own charm and beauty which can only be experienced by being a witness to it.

Types of Folk Dances of Uttarakhand:

This is one of the most popular dance forms here and is mainly performed in the Tehri Garhwal regions. This dance is primarily performed by the men of Uttarakhand and is done in an acrobatic form using a bamboo pole fixed in one place. The dancers climb up the pole and then balance himself with the help of his stomach on top. Under the pole there are various bands of musicians performing folk and traditional music and songs with the help of Dhol and Damau. Apart from the balancing act the person on top also rotates himself skillfully while also performing various acrobatic feats using their hands and feet. It is also one of the oldest and the most famous dance forms in Devbhoomi Uttarakhand.

This charming and traditional dance of this hill state is a well-preserved heritage of the Bard community – who roams from one place to another while simultaneously performing their traditional dance with Dhol. Harmonium, table etc and welcome the spring season. This cultural folk dance which is performed with great joy and happiness has a lot of mythological importance. Originating in the Kumaon regions of the state this dance marks the holi season which is later on celebrated for a whole month. In the past, this dance also used to be performed by wandering minstrels who used to go from one village to the next and announce the oncoming of the spring which is considered to be the most important time of the year to agriculturalists.

As per the name suggests this ritual is performed by the Bhotiya tribes of Uttarakhand which is one of the ancient tribes in this state. They have managed to preserve their rituals and traditions over all these years which is an achievement in itself. The performance of this dance is connected to the death related ceremonies. According to their traditions the departed soul of the deceased individual makes the body of a goat or a sheep their home and by performing this dance their souls are believed to be liberated. The typical dances of Bhotiya tribe include ‘Dhurang’ and ‘Dhuring’. This Bhotiya dance of people from this state is quite similar with the dance styles in Himachal Pradesh or even the hunting dances of performed in Nagaland.

This is one of the most colorful and fun-filled dance of courtship which is performed by men and women of Uttarakhand together. The concept of this dance does not require performances by two people who are actual lovers but the actual concept of this dance was started with an aim of enhancing the bond between two people. The dance takes place in a simple swaying motion and is not at all complex where the male performers play the part of a lover while the female takes up the role of a beloved she also holds on to a colorful handkerchief in right hand and a mirror in left hand. The dance is quiet mesmerizing and the music is extremely brisk, bright and peaceful which is played with the help of a Manjira or a flute.

Devbhoomi is also referred to as ‘the land of the Pandavas’ since they had made their way to this hill state in search of the stairway to heaven. This dance form is like an ode to these popular Mahabharat heroes where through the various dance styles the birth and death phases of the Pandav king are depicted. Different incidents of Mahabharat are showcased by the people here who dress up as these different characters. It is somewhat like Ram Lila and just like that it has also managed to keep the local folklore animated amongst the local people. It is primarily performed during the holy eve of Diwali and Dussehra in a large area with a lot of dancers performing together in unison and is a sight to behold.

Performed during religious eves and other social functions this dance form is the most popular one among the people of Jaunsar-Bawar area in Chakrata tehsil of Dehradun. Men and women take part in this dance and do so by getting dressed up in various colorful and traditional costumes. This dance form marks the beginning of any sort of a social gathering or puja ritual. This dance form is a representation of free spirits and purity of life and encourages people to relax for a while from all the mis-happenings in life. It inspires people to look at the brighter side in life at the silver lining and is included during celebration times such as marriages and births.

This hill folk dance is categorized in the spiritual and ghost worship which is accompanied with a regional folk song. A ritualistic dance is also performed in the form of puja ritual folk songs and is sung with an aim of honoring various gods and goddesses. This dance performance is based on 50 different ballads dedicated to not only gods and goddesses but also on spirits, ghosts and even fairies. This performance is done with music, singing and with occasional beating of the drums. The listener feels like they have been transported to a trance with these incredible sounds playing all at once. Spirits are also summoned who generally demands a goat or a bird sacrifice. Along with dancing they also put their hands in blazing fire without being harmed and perform other such incredibly surprising acts.

The roots of this traditional dance can be dated back to almost 1000 years to the warring Kshatriyas belonging to the Kumaon regions when marriages used to take place at the tip of swords. It was also done to ward off negative spirits that were believed to be following the baraat since they target on people’s happiness. Anybody during that time performing Chholiya dance was believed to get rid of this energy. This performance where the dancers are dressed in colorful folk attire takes place to the tunes of the rhythmic beating of the drums that sound like the music depicting war like situations. Generally categorized as a sword dance nowadays it is also performed in various other processions and occasions.

Generally popular for being a folk song, this is accompanied by a traditional Jhumela dance. This dance form is performed to mark all the major as well as minor occasions, fairs and festivals like Guru Purnima, Baisakhi, Maker Sankranti, wedding processions or any other nature related festival etc. primarily dedicated to women, men also make it a point to be a part of this dance. The steps and expressions or the message that is portrayed through this is the feeling of sadness that is experienced by newly married women who misses her happy moments that she had cherished before her marriage. Being a tribal song and dance combination it is only limited to extremely remote regions and is not well recognized in any other regions.

Performed primarily by the women population of Uttarakhand this graceful dance takes place during the wedding ceremonies and is also later on joined by the men as well. As per the traditions of this dance the dancer is required to balance a metal plate on top of their head and take spins simultaneously doing so. It also takes place mainly in the Kumaon regions and is performed in circles of men and women singing folk songs and playing folk music. This dance performance is a mark of happiness and joy among the people and welcomes positivity into any occasion where this dance takes place.

Jhoda and Chachri is combination of song and dance which is performed together within the communities. Jhoda is sung by interlinking each other by the arms while moving at a slow pace yet synchronised perfectly in a circle. This song and dance is done by male as well as females in different groups. It is also related to its other names such as Jhadawa, Jhora, Jhawad etc.