Folk Songs and Music of Uttarakhand

Music is a huge part of the cultural and traditional ethos of Uttarakhand. They have songs to celebrate every month, occasion, auspicious time etc. there are varying degrees of differences between the folk music of Garhwal to that of Kumaon. The traditional richness of Uttarakhand is depicted clearly through its songs and music which the people sing to celebrate special occasions. The folk songs here can be categorised into different sections like – marriage, ceremonies, melancholy etc. These songs are accompanied with the traditional musical instruments like Dhol, Thali, Dholki, Turri, Damoun, Harmonium etc. If you ever get to listen to the music you will definitely feel the closeness of music to nature due to its tones and melody that is produced. 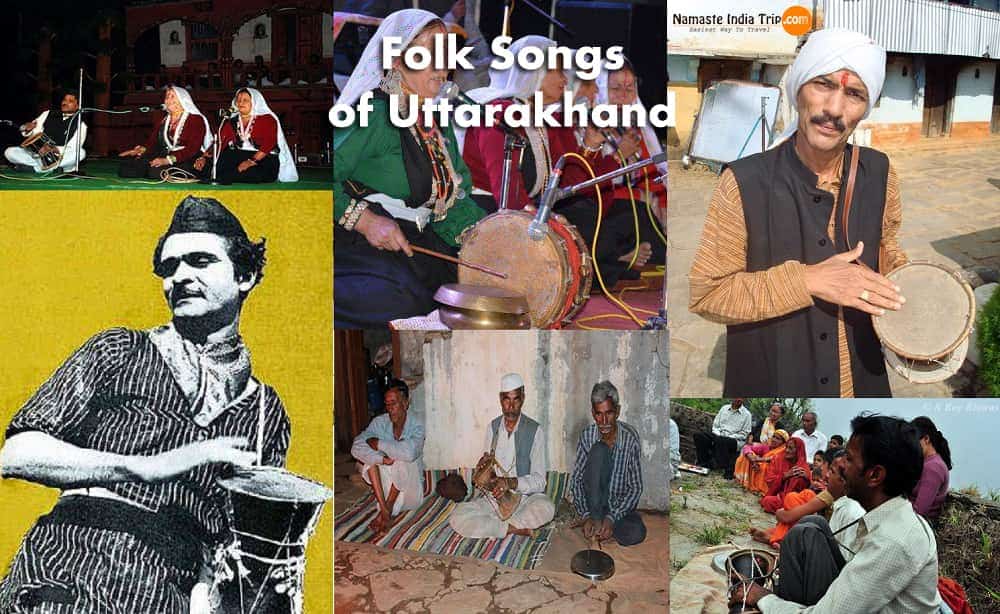 Here are a few folk songs from the hilly paradise state of Uttarakhand:

Sung by the village women while performing their daily chores on the fields or at home this is a collection of folk songs expressing various different emotions like love, sorrow, happiness etc. these colourful and enchanting songs are so poetic that they have been compared with the words written by the great poet William Wordsworth. The songs are generally very sweet sounding, romantic as well as mesmerizing. The songs can also be sung during various festivals and other auspicious times which only makes the

This is one of the most popular forms of song and music in Uttarakhand which is sung during celebrations, festivals, fairs, weddings etc. played with the help of Dhol, Dholki, Turri, Mandan and others, this song is performed between a man and a woman in a question answer form which is an extremely entertaining thing to watch. It comes under the category of being a ‘love song’ and is mostly sung by the people belonging to the regions of Rawain – Jaunpur in the district of Tehri Garhwal. This song is generally accompanied with a dance performance which is a very lively and fun activity to even witness.

Finding its roots in the Sanskrit word ‘Jaga’ meaning to wake, these songs are practised by both Garhwali and Kumaoni groups of people in a ritual form for the spirits of their ancestors. By chanting these songs it is said that all the local deities and gods are awakened from their dormant state. This Jagar performance is also done to seek penance or justice from the gods. The government of India has also recognised the importance of folk songs and music by awarding the only woman Jagar singer, Basanti Devi Bisht, Padma Shri award.

Basanti songs are primarily composed and sang to welcome the season change from winter to spring. Their songs sound extremely cheerful, happy and clearly represent the blooming of the flowers that occurs throughout the hills. This song is one of the most special songs here which is sung with great zealous throughout the entire hill folk. just as the hill sides get dotted with colourful high altitude flowers and plants, people individually or in groups burst out singing their favourite Basanti song.

Mangal Geet or the auspicious songs are composed with an aim of being sung at weddings or during sacred ceremonies. While the song is being sung simultaneously the purohit keeps on chanting holy Sanskrit Shlokas. Gaali Mangal Geet is sang in the form of a poem while singing these songs people also include some tease language in between and since it is an age old tradition this is not considered as an offence or bad language. These are also the songs that add an element of joy making weddings a memorable event. This mostly takes place in a Garhwali wedding and is also an essential part during this auspicious event.

These folk songs are sung by the shepherd folk of the hills who sing it in the form of an advice that is being given from the older generation to the younger generation which are based on their life experiences and feel that it may come in handy for them while grazing sheep and goats and their other cattle. Men as well as women take part in this songs and it is well taken care of by the respected elders of the community.

This folks song is centred around the Garhwal division and is sang to depict the sadness and the sufferings faced by a woman which is caused when she is separated from her husband. Through the song she says how much she laments and misses the presence of her better half when he is out for work and has gone out looking for a job. She curses the circumstances which has caused both of them to be away from each other. Songs in this category are cleverly formed which completes three aims at once like the season, poverty and the separation phase. The song sounds extremely melancholic and clearly depicts what the singer is feeling.