Also referred to ad Jumna or Jamna (not Jamuna of Bangladesh) this river is famed for being the 2nd largest tributary of Ganga and the longest tributary in India. The river emerges from the slopes of the Champasar glacier in the Bandarpoonch Parbat on an elevation of 8,387 metres above sea level this place marks the lower Himalayan region of Devbhoomi Uttarakhand. The holy river travels over a distance of 1,376 kms and merges with the holy river of Ganga at the Triveni Sangam in Prayagraj which is one of the holiest locations in India and site for the famous Kumbh Mela of India which takes place once in every 12 years. All this shows that the river holds incredible religious and holy place in the hearts of devout Hindus. 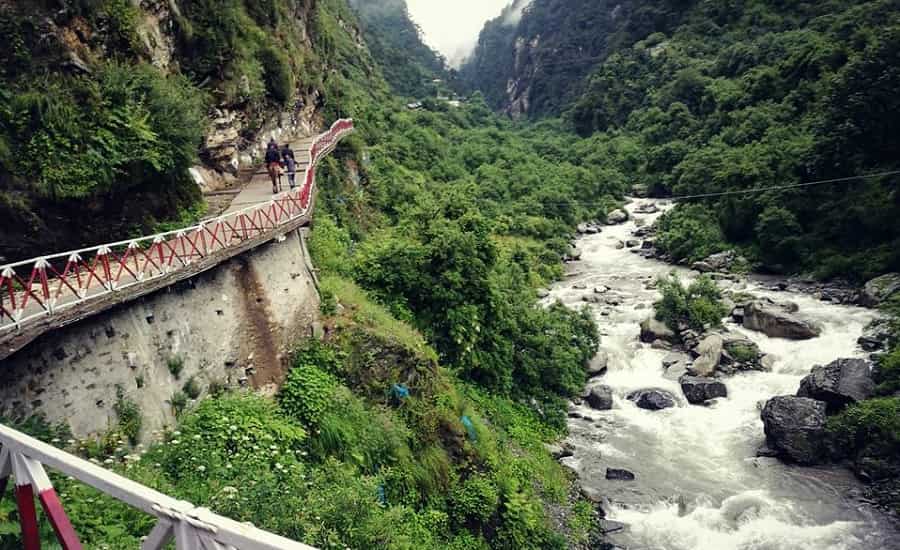 Literally translating into ‘tail of the monkey’ and adorned in the Garhwal division of Himalayas this mountain massif is named and dedicated to lord Hanuman. It is strategically situated all along the western edge of the high Himalayan ranges and covered in white snow making a visit here feel like a dream come true. Lying within the famous Govind Pashu national park and wildlife sanctuary this is also a major watershed for Yamuna river whose source can be traced back to above and beyond Yamunotri temple shrine. The peak was first summited by Maj Gen Harold Williams in the year 1950 which also included the great legendary mountaineer – Tenzing Norgay. The place forms the perfect destination for outdoor adventure seekers and fun seeking travellers.

From its source in the Champasar glacier the river flows 200 km southwards making its way through the lower Himalayan region as well as the Shivalik ranges. Near Naugaon you can witness some terraced land formation which are believed to have been formed here over a long period of time. Tons river, a centre of adventure water sports activities, is the largest tributary which drains a massive portion of the upper catchment area and is said to hold more water than the main stream of the river. Rising from Har ki Dun valley it later on goes on to merge near Dehradun with Kalsi. Gracefully making its way downwards from Dehradun it then crosses the famous Sikh pilgrimage destination of Ponta Sahib and finally reaches Tajewala in Haryana. During the dry season months the stretch of river between Delhi and Tajewala dam completely dries up. The river Yamuna defines the border between Uttarakhand and Himachal Pradesh and in between Haryana, UP and Delhi. It runs almost parallel to Ganga once it enters the Indo Gangetic plains. This land in between is the Ganges – Yamuna doab region and spreads on an area of 69,000 sq. km.

Just like the other rivers in India Yamuna river also holds a great deal of religious and sacred significance in the lives of the Indian population here. The river is named after the sister of Yama i.e. Yami who also happens to be the daughter of Surya. She is worshipped everywhere it goes. The river is also connected to the religious beliefs about lord Krishna. As per the various religious Hindu texts, especially the Purans, has mentioned this river. It is said that when lord Krishna was being taken across the Yamuna river after his birth, Yamuna parted river into two parts so as to make way for Vasudeva carrying Krishna’s basket. Since then Krishna had spent his childhood and adolescent years by the river, before finally meeting her in the forest when he had gone to meet the Pandav brothers.

Places to Visit Around Yamuna River

Rivers in India are considered to be extremely sacred and is treated with great respect anywhere it goes through. Once the river boasted of its clear blue water but now it has turned into one of the most polluted rivers in India, especially around the capital – New Delhi. The pollution has been pinned to the 58% of the waste which is dumped into this river. Everyday this pollutant count has increased at an alarming rate. The worst part? 70% of the Delhi population drinks the water treated from Yamuna. To add on to the problems, 15 out of 32 sewage treatment plants are working below their full capacity. This is only helping in increasing the river pollution. A serious step in conservation needs to be taken immediately in order to maintain the sanctity and respect the historical significance of this river.