Situated in the Rudraprayag district of Devbhoomi Uttarakhand, and perched at an elevation of 1,980 metres above sea level, Triyuginarayan Mandir is one of the most pious pilgrimage spot in India. This ancient temple is dedicated to Lord Vishnu and remains flocked by pilgrims seeking for the almighty’s blessings. The entire architecture of the temple bares an uncanny resemblance to the Kedarnath Dham temple. One of the most unique features about this temple is the fact that one can easily pray to Lord Shiva, goddess Parvati and Lord Vishnu at one single place. Nestled amongst the lush greenery of the valley offering impressive views of the panoramic vistas, Triyuginarayan temple is s must visit among not just devotees but also among peace seekers, nature enthusiasts and adventure lovers. 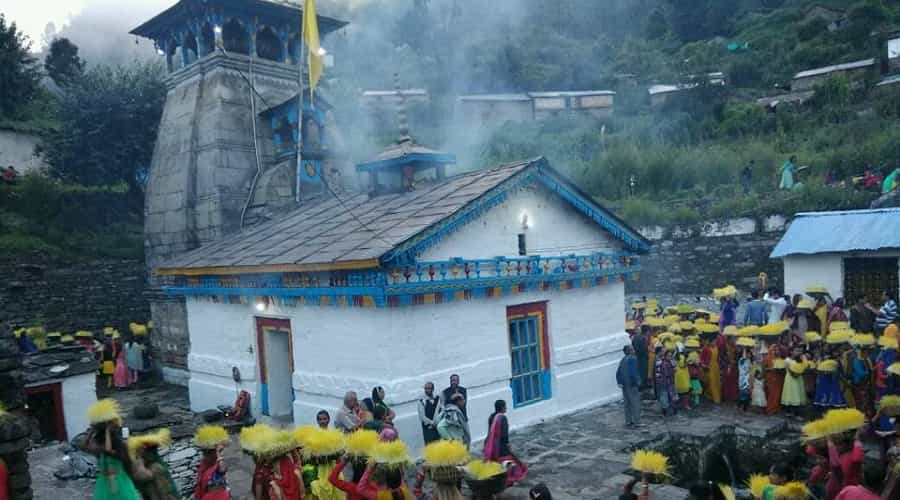 This ancient and quaint temple is believed to be the spot where Lord Shiva had married his consort Parvati. It is said that Lord Shiva had asked for her hand in marriage at Guptkashi, which is another holy destination in India and married her right here in Triyuginarayan Mandir during the Satya Yuga. This celestial marriage was formalized by Lord Vishnu who was present there and was the acting brother of Parvati during the marriage processions and rituals. Lord Brahma was the priest of this glorious wedding which was also witnessed by numerous ancient sages. To mark that occasion there is an Akhanda Jyoti or an eternal flame burning throughout the year which is said to be burning ever since the marriage took place. The exact location of the marriage is marked by a stone known as Brahma Shila which is placed right in front of the main temple structure. This iconic temple also finds its mention in Sthala Purana – a scripture which is specific to this pilgrimage centre. Prior to the marriage ceremony all the gods and sages are believed to have taken a bath in all the four Kunds of Rudra Kund, Vishnu Kund, Saraswati Kund and Brahma Kund. It is also a common belief that taking a dip in these waters will not only help you in attaining purity of the soul but will also cure infertility.

This ancient and extremely sacred temple is situated at a distance of just 12 km from the holy town of Sonprayag which is also the last motor-able road which leads up to the temple site. There are some trekking routes which are made available by the authorities for the convenience of the pilgrims and Yatris. Here are some of the trekking routes taken up by the pilgrims and devotees:

The best time to visit Triyuginarayan Mandir in Rudraprayag is during the onset of summer season which falls between the months of October and March. The climate and temperature remains extremely comfortable and pleasant during the peak seasons and makes up for a great vacation experience for the visitors. The month of December marks the beginning of cold and freezing winter season which lasts till the month of February and the temperature remains between 0 degree Celsius and -15 degree Celsius. The monsoon season during the month of July and September makes this place extremely cold and prone to heavy and pouring rainy conditions. The summer months of April to June when the temperature falls between 20 degree Celsius and 36 degree Celsius is considered to be one of the most highly preferred pilgrimage time when the temple are also filled with devotees and pilgrims.

The village of Triyuginarayan is located at a comfortable distance of 5 kms from the holy town of Sonprayag which is the confluence point of River Mandakini and Songanga. The geographical belt which connects Sonprayag and Triyuginarayan Mandir extends up till 14 kms between the temple and Toshi village. The entire region has extremely favorable agro-climatic conditions which are favorable in the plantation and growing of apples, stone fruits among other fruits. During the winter months the entire area gets covered with a thick and white layer of snow making accessibility difficult. The temple opens for Darshan early in the morning at 7 am and closes at 7 pm in the evening.

Why Choose Triyuginarayan Mandir for Wedding

People who are looking to get married and are not able to fix a destination for their upcoming wedding then this temple is one of the most sacred and pious wedding destinations in India. this sacred site offers you the opportunity to tie the knot along with some traditional touch. Circumambulation by the couples getting married around the holy fire makes this experience even more holy and pious than the normal Circumambulation. This offbeat and surreal location which is set against the backdrop of lush greenery and snow capped mountain tops makes a wedding at this temple one of the most exhilarating experiences.