Kedarnath and Badrinath will Disappear (Prophecy)

It is predicted that in the future Ganga River will disappear from the earth and will again move to the heaven. Hence the pilgrimages situated on the Ganga Riverbank will be of no importance and will be counted as nominal pilgrimage sites. Where Kedarnath is considered as the resting spot of Lord Shankar, Sri Badrinath is believed to be the eighth Vaikuntha of the universe, where Lord Vishnu lives in rest for half a year and gets up for a half year. 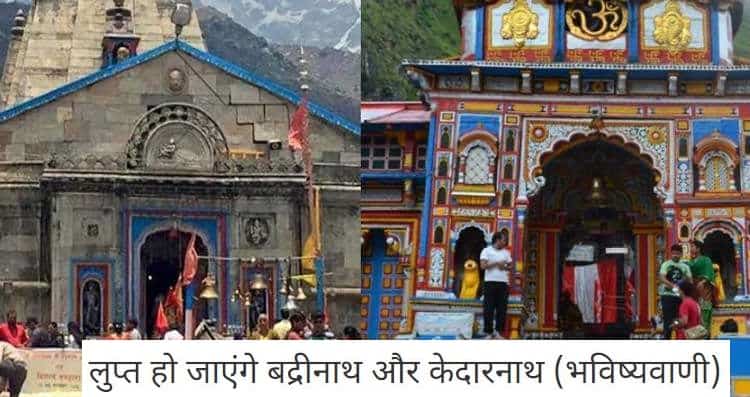 Let’s Know Something about Badrinath:

The entire country is the destroyer of River Ganga- As per Hindu mythology, when River Ganga descended on the earth it was divided into 12 water streams. The stream presented at Badrinath got famous as Alaknanda and became the place of habitation of Lord Vishnu, Badrinath. Kedar valley which is situated on the banks of Mandakini River that flows along with Alaknanda River houses one of the most important and sacred Jyotirlingams among 12 Jyotirlingams in the country. This entire region comes under the Rudraprayag district. Rudraprayag is the same place where the personification of Lord Rudra was done.

However, now there are only two streams Alaknanda and Mandakini which are in existence out of those 12 streams and thirdly the river which when flows forward called as Ganga. Due to the continuous rise in population, and continuous mining resulting in erosion, deforestation, and some religious activities, not only the water level of the rivers is going down but also they are becoming polluted.

Kedar Valley is bedecked with 2 beautiful mountains- Nar and Narayan. This is the meditation spot of one (Nar and Narayan) of the 24 incarnations of Lord Vishnu. Lord Shiva was deeply pleased with their meditation and appeared in Kedarnath.

According to the Puranas, Ganga is a river descended from heaven and polluting this pious river anyhow will result in the devastation of the whole Jambuq and eventually, in the heaven returning of Ganges. At present, River Ganges has become completely polluted and even the water quality is also not the same as it was earlier.

The greater part of the religious destinations of Hindus is arranged or settled on the banks of the holy rivers Ganga, Yamuna, Krishna, Godavari, Indus, Brahmaputra, Kaveri, and Narmada. While the general population of the country has totally pulverized the stream Ganga, all the Hindu journeys have been squandered because of business development and pollution. After this, Ganga has now arranged herself to return to paradise.

As per the Puranas, after the occurrence of earthquake, flood, and drought, River Ganges will disappear and the beautiful and the interesting stories of Badrinath and Kedarnath Shrine associated with River Ganga will end up.

Idol of Lord Narsingh: it has been concluded and came in the notice that from now devotees cannot do the philosophy of any god at Badrinath. According to the assumptions, the hand of Lord Narsingh idol is meting down gradually year after year.

Let’s Know the Prophecy of Kedarnath

The natural devastation in Uttarakhand shows that in the name of development, people have pushed the pilgrimages towards the destruction. It is also seen that men have considered these pilgrimages as the sightseeing destinations more than a religious spot. So, it is obvious to be paid now. According to the Puranas, Kedarnath and Badrinath Dham will disappear in a few coming years and a new pilgrimage will be worshipped named as Bhavishya Badri.

Rudraprayag is the holy confluence of divine Alaknanda and Mandakini River and from here only it gets united in a stream and foregathers with Bhagirathi-Ganga River at Devprayag. In Devprayag, the holy Ganges River originates from the revered shrine of Gangotri, Uttarakhand. At a certain distance from Devprayag, the existence of Alaknanda and Mandakini gets vanished and emerges out as the Ganges and in the meantime, River Ganga comes down on the flat divine ground of Haridwar. There is a strong belief among Hindu devout that after doing philosophy at Kedarnath and visiting Nar and Narayan peaks in Badri area absolves all the sins of the devotees and gets blessed with salvation. The same impact has been mentioned in the Koti Rudra of Shiva Purana.

According to the Badrinath Tales, it is believed that in Satyuga, Gods, saints, and even the ordinary people used to receive the visions of Lord Vishnu. After this, in the era of Tretayuga the only god could see other gods and rishis and in the Dwapar era, gods became completely disappeared. Sages and ordinary people had to satisfy with the temples and the idols of God.

According to various holy epics, the level of sin keeps on rising and had arisen at a level from Satyuga to Dwapar and it became quite difficult to do the philosophy of gods. Kalyug era came after the Dwapar age which is the present era of the age.

We can read the mentioning of Badri-Kedarnath’s upset nature in the Puranas. Puranas state that after 5000 years of Kaliyuga age, the earth will come under the control of Sin kingdom. Kalyug will be its peak level and then greed and work would be the top measures of people’s belief. There will be a lack of true devotees then. Hypocrite saints and believers will be dominating on the earth. The duplicity will deceive the general public by staggering the religion and will take the general public at a low level. And then, the result would be River Ganga who absolves the sins of mankind will return to paradise.