Uttarakhand also called as land of various holy and ancient abodes is reckoned to house numerous ancient temples dedicated to various deities. This ancient yet beautiful temple is located en-route Sri Nagar and Rudraprayag district in Uttarakhand. The temple is beautifully nestled on the banks of the holy Alaknanda River. The temple is quite popular among the locals as it is believed that one visit the temple gets whatever they wish for. It is said that the present structure has been relocated in 2013 from the 20-meter high rock and has been structured beautifully. It is thought that Goddess Kali acts as a protector of all the sites of Char Dham in Uttarakhand. Dhari Devi Mandir is thronged heavily by devotees all throughout the year but during Navratri, the number of devotees increases to seek the blessings of the goddess. Photography is strictly prohibited inside the temple premises. Another interesting fact about this Mandir is that the idol of the presiding deity holds some secrets since her face changes thrice a day along with protecting Chardham. 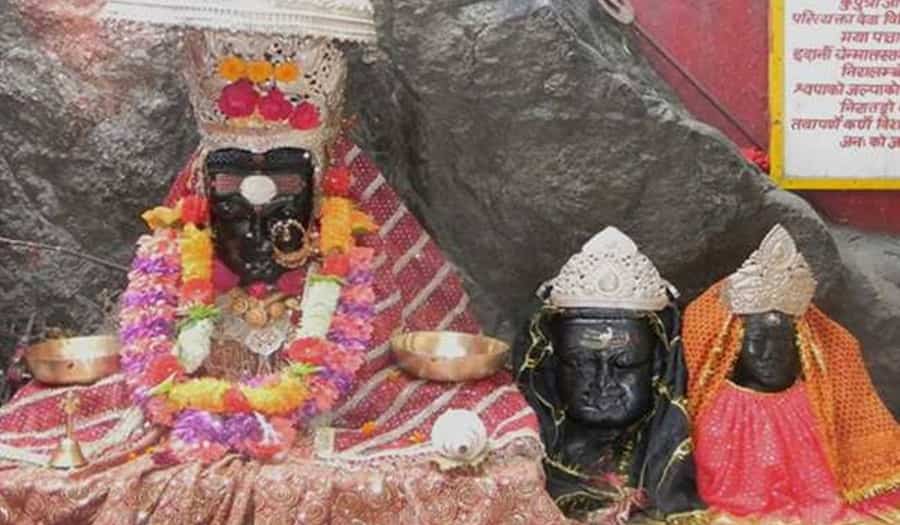 Similar to other popular pilgrimages in Uttarakhand, Mata Dhari Devi Mandir is also famous for its interesting legends. According to the popular Hindu mythology, the upper part of Goddess Kali is being worshipped at this place while her lower part is worshipped at Kalimath and is praised as Goddess Kali. There is a belief among locals that they have witnessed the different phases of a girl’s like from a girl to a woman and finally as an old lady. Mythology supports the statement that the idol should not be placed under roof and since then the idol of the temple is kept in an open area.

It is believed that Dhari Devi Temple is the protector of the revered Char Dham pilgrimage sites. The legend states that due to the Srinagar Hydel Project the idol of the temple was taken away and after a few hours the region experienced the devastating cloud burst. Devotees believed that it all happened as the idol was shifted from its original divine place (Mool Sthan) and since then that hydel project is being kept as ruins. This didn’t happen for the first time as in 1882 when the same attempt was done by a local king. At that time also the region suffered a hazardous landslide.

It is believed that the temple was washed away in a heavy flood and the idol of the Goddess Kali was stuck amidst the rocks. Then the villagers of the nearby village named Dharo village heard the painful voice of the Goddess and fixed her idol at this spot and this is how the temple got established and the place gained its religious temple.

A small yet beautiful and quite popular village located near Srinagar, this beautiful place is reckoned for the bravery of Madho Singh Bhandari. Madho Singh is the one who separated India and Tibet with an international boundary which is presently called a Mac-Mohan line. You can see a huge statue of this brave man where each and every villager flocks to worship him. This huge statue is the main attraction of this village due to its awe-inspiring design.

It is thought to be the same place where the original Shiva Linga of Vishwanath Temple of Varanasi is kept since the reign of great Mughal emperor Aurangzeb. It holds great importance in Hinduism which is beautifully adorned with colorful and scented flora and many ancient temples.

Some other Excursion Places Around Dhari Devi Temple

If time allows you then do not miss out the chance to visit some more important places like HNB Garhwal University (which recently got centrally recognized), Kamlesh temple, Keshorai Math, Vishnu Mohini Temple, and Kilkileshwar Mahadev Temple are some other places where you can gain the devotional experiences.

Festivals Celebrated at this Temple

The auspicious occasion of Navratri, Deepavali, and Kartik Purnima are organized and celebrated here with great joy and zeal. On these grand celebrations, the temple is adorned beautifully and is crowded heavily with devotees.

How to Reach the Dhari Devi Temple

This highly revered pilgrimage of Uttarakhand is easily accessible via all the transportation modes. However, road transport is the most convenient way to pay your homage at Dhari Devi Temple as there are frequent inter-state buses plying on a regular basis which provide you with a comfortable ride.

By Air- Jolly Grant Airport is the nearest airport situated 136 km away from the temple. There are numerous buses and taxis running regularly to connect these two terminals of Uttarakhand.

By Rail– Rishikesh and Haridwar are the two nearest railheads located around 124 km and 142 km away from Kalyasur. After getting down at this place you can take a bus or a taxi to reach your destination.

By Road- A well-connected road network of the state gives you a comfortable ride to seek the blessings of Goddess Kali. The region has a smooth connection with various popular and major tourist destinations in Uttarakhand including Rishikesh, Rudraprayag, and Dehradun.

Places to Stay on your Spiritual Journey to Dhari Devi Temple

Srinagar and Rudraprayag are the two places which you can choose for accommodation. You can find a chain of budget hotels to resorts which are established closer to the temple and are well-equipped with all the basic amenities and facilities required by a tourist. They cater to everything as per each guests needs.

The temple is located in Kalyasur which witnesses much favorable and serene environment from November to June and it is also a great idea to visit this pilgrimage during any of the festive seasons as the place looks most delightful.

If you love walking on the snow of playing with snow then winter is the best time to visit this district. The weather gets quite cold with the temperature hitting sub-zero level.

Weather in the Monsoon

The soul-enriching aroma of the soil, swaying of trees, and the changing colors of the sky make this place quite appealing and inviting. However, the region is heavily prone to landslides and roadblocks so it is advised to stay updated with the weather forecast before planning your trip.