There has always been a curiosity surrounding the female Naga Sadhus at the holy Kumbh. People are always curious to know what kind of a life these female Naga sadhus lead. Women Naga sadhus were not normally present during the Mahakumbh or Kumbh. Even if they were present they were there in the shadow of the male Naga sadhus. For the first time in the history of Kumbh Mela this year after the male Nagas Akhara came the female Nagas Akhada among great enthusiasm and zeal. Women monks performed and took part in royal baths and completed all the required legislations. 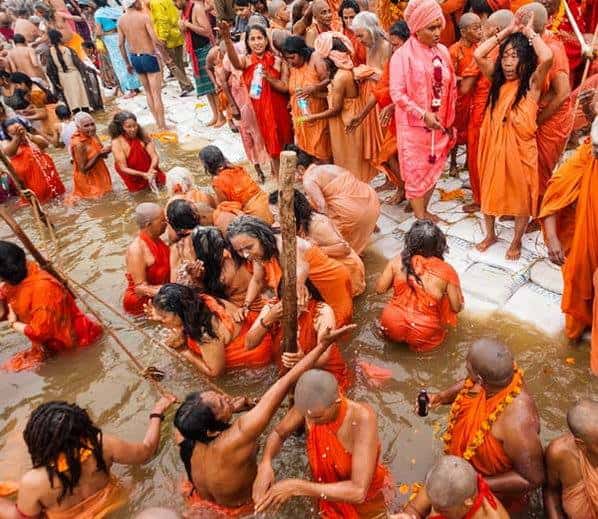 ‘Naga’ is a title. All the Vaishanva, Shaiva and Udasin form the Akhaadas of the sects. Nagas have the option of wearing garments as well as being Digambar or nirvastra. In the same manner, when women take this initiation to practice the Sanyasa life, they are also turned into garmented Nagas. The female Nagas are allowed to wear just one piece of garment that is not too stitched. This is also known as ‘Ganti’. These women are not permitted to take a completely naked bath at the Kumbh Mela. They keep wearing this orange – reddish garment even while taking the holy dip.

Out of the 13 sadhu Akhadas, Juna Akhada is the largest one. During 2013 in Prayagraj, the Juna Akhara was accommodated with Maai Bada akhada. This time in prayagraj’s 2019 kumbh, the kinnar akhada has also been accommodated into the Juna akhara. The head for Kinnar Akhada is Laxmi Narayan Tripathi. However, apart from this female Akhada there are a number of different Akharas consisting of female sadhus who are associated with different Akharas.

Juna Akhara has bestowed the Mai Bada Akhada with a look of Dashnaam Sanyasini Akhada. In the entire region of Mai Bada Akhada in Kumbh has been completely changed and the Akhada has been given approval and stamped. During that time, the chief Mahant Divya Giri of Shri Mankameshwar temple in the city of Lucknow was made the president of the Sanyasini Akhara.

All the female sadhus of this Akhaada are known as ‘Mai’, ‘Avadhootaani’ or Naagins. However, these ‘Mai’ and ‘Naagin’ are not selected for any major post in the Akhada however, they are given the post of with the term of ‘Srimahant’ when they are allotted as the head of some particular area. The female selected as the Srimahant travel in a palanquin for the royal holy bath. They are also permitted to put up the flag of their Akhada, Danka and Dana, under their religious flag. A separate camp is set up for the women Sanyasis of the Kumbh that goes with the name of Mai Bada. This camp is set up right next to the Juna Akhara.

Juna akhada consists of more than 10,000 female sadhus. Apart from this there is also a number of foreign female Sanyasis. Especially amongst the women of Europe the attraction for female Nagas sadhus has gone up. Although these women know that the Nagas have a tough life and go through a lot of hardships and difficulties, these foreign women have decided to adopt this practice.

During the Kumbh of 2013, a French male known, Korine liyere, had adopted the practices of a Naga sadhu. He was given a new name of ‘Divya Giri’. She took this initiation in 2004 after performing hard penance and attained his Naga post. He had completed his studies for a medical technician from the institute of public health and hygiene in New Delhi. They say that the women want to perform some things separately. They say that it is their new identity now. The divine lamp wrapped in saffron cloth tells that the equality between men and women haven’t yet been achieved. Another French woman, who does not provide with the full old name, after her initiation her name has been converted to Sangam Giri. Sangam Giri has started her search for female gurus. One Naga sadhu has to choose 5 gurus.

Nikolae Jacques was involved in the field of filmmaking in New York. She became a monk in 2001 and now she is working as a contact officer for some other fellow female sadhus. They say that the women in India, till date, are completely dependent on the men in their life. Sometimes its their father, their husband or their sons, however this is not the case in the west.

Female sadhus are also utilising the latest technologies. 3 quarters of the Juna Akhara is filled with women sadhus from Nepal. This happens, because in Nepal they believe that a widow belonging to upper caste cannot get remarried and the society will not accept remarried, upper caste widows. This is the reason why instead of returning back to their homes they convert themselves into a sadhu.

It is important to know that Mai Bada did not used to have any independent identity nor did they have a separate religious flag. All the religious activities of these female sadhus used to take place in the old, Juna Akhada. Meanwhile, as the number of female sadhus increased in the Akhada they demanded a separate Akhada to mark their existence. As per their demand, the Juna Akhara decided to convene a meeting to consider and take a look at their demands at the 2013 Prayagraj Kumbh. All of their demands were met and they were given acceptance.

How is a Woman Given the Name of ‘Naga Sadhu’:

There is no special process involved in this. Prior to becoming a Naga Sanyasini, the monks and saints investigate and analyze the previous birth of the woman in question. Before becoming a Sanyasini she has to prove that there is no attachment left between her family and the society anymore. After the said things are satisfied then the Acharya gives an initiation to this woman. Then they are said to get rid of all their previous clothes and instead wear yellow clothes.

Then the woman has to shave her head just like the other Naga sadhus as well as perform the ritual of Pind Daan for themselves. The woman is sent off to the river for a bath. The female Naga sadhu chants gods names every day and in the evening they perform Dattatreya worship.

After having lunch in the afternoon, the women chant the name of Lord Shiva and go to sleep. Women Sanyasinis are given complete respect in the Akhadas. When the woman passes all these excruciating tests she is given the title of ‘Mata’ or mother. When the female Sanyasini is completely converted.