Learn About The Wonderful Knowledge About Kedarnath

Home » Learn About The Wonderful Knowledge About Kedarnath 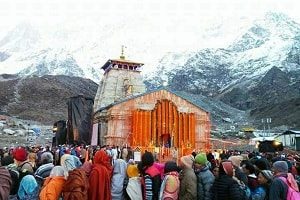 Being an ancient site of pilgrimage the temple of Kedarnath holds immense historical and scientific significance. There are numerous lesser-known and mind-blowing facts which are surrounded around this 8th-century hub spot of religion. The current temple was established by the great sage Adi Shankaracharya who did this with the help of the kings of Uttarakhand. Being located at an incredible height and dating back to several ages and centuries ago this temple has been successful in attracting a large number of pilgrims from not only in India but also abroad who visit here to experience the grandeur and mystical energy that surrounds it.

If you are planning on taking this religious trip to this enchantingly mystical temple then here are a few lesser-known facts which will definitely baffle you and pique your interest before you even reach there:

Kedarnath Shiva Statue Is Without A Head

As per the famous mythological incident about how the Pandavas had encountered Lord Shiva and how he had hid himself in the guise of a bull and he had started sinking inside the earth once Bhim had recognized him, the idol of Lord Shiva inside the temple is believed to be without a head. However this missing head is believed to be present in Doleshwar Mahadev Temple in Bhaktapur (Nepal). Other holy temples are established in various places from where his hands, legs and other parts had come out from. This is one fascinating fact that sets his temple apart from other Lord Shiva temples in India or perhaps the world.

The district of Rudraprayag was completely covered in ice as a result of a mini Himalayan ice age which had engulfed this region entirely. Kedarnath temple was still there and it was also covered completely under a very thick layer of ice and snowfall. For 400 years the temple remained buried inside this ice age and it survived that. As per the research and studies conducted by scientists the temple had withstood these hostile and inhospitable weather conditions for centuries and it had become clear that whoever was responsible for building this temple structure wanted it to survive for a thousands of years to come.

Kedarnath Dham is a true testament of the top notch engineering skills that the creators and construction workers had possessed. The creation of this temple was done with immense care and with an aim of symbolizing every aspect of religion through architecture. The exterior of the temple is made out of pure white marble that signifies peace and harmony among all. A temple structure which is perched on an elevation of 3,583 metres above sea level and constructed ages ago, has impressive dimensions and is built using large stone slabs with 12 feet thick walls.

After much research and studies the exact construction date for the temple of Kedarnath is still unknown yet it is clear that it was built centuries and ages ago. The closest that we have come to know about the construction date of Kedarnath Dham is when the Pandava brothers had come here in search of Lord Shiva and they had established the Panch Kedar Yatra temples they had also constructed the pristine temple of Kedarnath. After this the temple was re constructed during 8th century by Adi Shankaracharya as a part of the Char Dham Yatra of Uttarakhand. However, when the first stone of the temple was laid and by who is still a mystery.

How Was Kedarnath Named?

There are numerous theories pertaining to how Kedarnath Dham got its name and how Kedarnath region was brought to life. One of the most popular theories about how Kedarnath got its name is that it was named after king Kedar who was the ruler of this region during the era of Satya Yuga. Later on, the presiding deity which is represented in the form of an irregular triangular ling, became to be worshipped as lord Kedar or another incarnation of Lord Shiva.

These were just a few selective and interesting facts that define this Dham and after reading this, your next visit to Kedarnath Dham will hold a lot more significance.

9911884413
PreviousThe doors to Kedarnath open; More than 1100 registrations have already been madeNextList of Hotels in Yamunotri