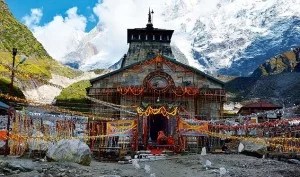 Here years after the 2013 floods wrecked Kedarnath and caused immense loss of life and property…things finally look promising at Kedarnath. There has been a significant increase in the number of pilgrims recently. Just before the shrine prepares itself to close its portals on Tuesday the visitor count touched 3 lakhs. The Chief Minister Harish Rawat spoke about the fantastic footfall and contrasted it with 2014 (year after the disaster) when the footfall had reduced to only 40000.

The region of Kedarnath thrived on tourism and this domain suffered badly after flash floods wrecked the place. The Chief Minister Rawat said that more than 15 lakh devotees visited the shrines of Char Dham this time.

At a press conference in the Bijapur Guest House, Mr HARISH Rawat said that out of the total number of visitors to Char Dham, 3 lakhs visited Kedarnath during the 2016 Yatra season. The Chief Minister further clarified that the target of the state was to attract 40 lakh Char Dham devotees in the coming 3 years.

The holy shrines of Yamunotri and Kedarnath were already closed with great ceremonies earlier this year. On Tuesday, the Chief Minister Mr Rawat offered obeisance to Kedar Ji before the Dwar closing ceremony took place. A grand palanquin carried the idol of Kedarnath Ji left Kedar for Ukhimath where the idol will be housed in Omkareshwar temple. This procession in Palanquin is known as Utsav Doli.

All Himalayan temples of Badrinath, Kedarnath, Yamunotri and Gangotri are closed each year for 6 months as they are completely covered by snow.