Being located at a whopping height you should not underestimate the weather condition here. From being cool and pleasant it can also change its course to freezing cold with chilly winds. The weather in Kedarnath Dham is dominantly cool and even if during the summer months the weather changes in the morning to bearable conditions then the temperature severely drops by night. 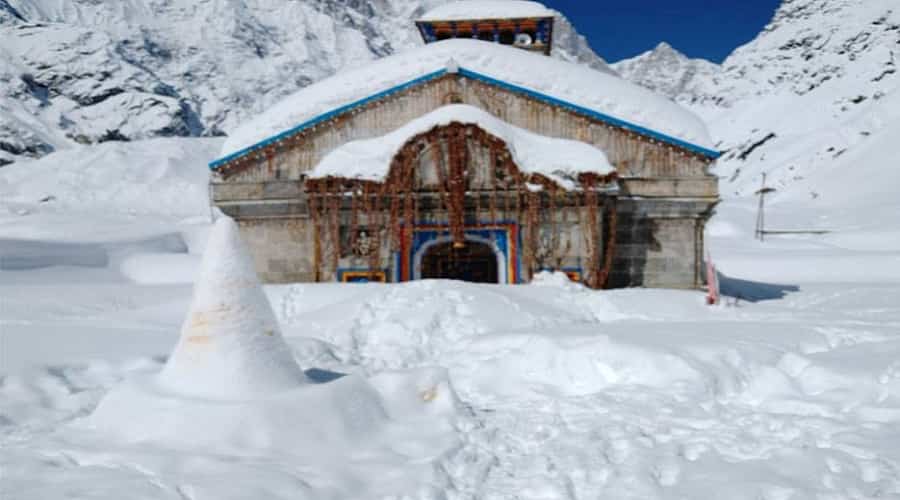 While planning a trip we get so engrossed in the larger requirement for the visit that we forget to keep in mind the basic and the most vital information that has the potential to make or break your travel plans. Here is a month wise breakdown of temperatures experienced in Kedarnath Dham which will help you in planning your trip in a better and more detailed manner:

January – The overall weather condition in this month is extremely freezing cold accompanied with regular snowfall. The temperature here goes down to zero and subzero levels and Darshan is completely shut down during this time.

February – This is also the month when the entire Kedar valley is engulfed in persistent and freezing cold. Some nearby places are visited by tourists and adventure enthusiasts where the temperature stays between 2 to 5 degree Celsius.

March – The temperature rises at a gradual pace during this time to 10 degree Celsius and this is also the time when the snow begins to melt hence opening various travel and pilgrimage avenues for visitors.

April – An increase in temperature is experienced in this region and travel and pilgrimages are made possible during this time. The temperature rises to 10 to 11 degree Celsius.

May – The temperature during this month rises to almost 12 to 15 degree Celsius and this is also the month which marks the opening of the temple kapat during the holy eve of Akshaya Tritiya that marks the change of weather from winter and welcomes the onset of the summer months.

June – This is considered to be the best time to make a trip to Badrinath Dham and the temperature rises to almost 18 degree Celsius making the climate here extremely pleasant and bearable. This is an ideal time to go on outdoor sightseeing of tourist destinations.

July – This month is the warmest month in Kedarnath and marks the onset of the rainy season when the temperature also drops a degree or two. This is the time when the region experiences some showers.

August – This is the peak monsoon month where the temperature rises to as high as 18 degree Celsius. Remember to be careful while making your travel plans since this is the month when the place is covered in unexpected landslide occurrences.

September – The rains stops by the end of this month and the overall temperature experiences a gradual drop. The temperature goes to as low as 15 to 8 degree Celsius. If you want to experience the mountain rains then this is the best time to visit the temple.

October – The weather takes a turn for the worse with the onset of this month where the temperature goes to as low as 5 degree Celsius. The nights are extremely cold and chilly and remember to load up on winter wear.

December – The temperature remains extremely cold and inhospitable. Visitation during this time is shut off and the entire region remains buried inside a thick covering of white snow.

The spring to summer months are the busiest times in Kedarnath where after the temple Kapat opens for Darshan, people from far and wide take a tour of Dham. The weather remains sunny with cool breeze and the average temperature remains at a pleasant level of 20 22 degree Celsius. This is also advised to be the best time for you to visit Kedarnath. This weather lasts from March to June end and is the time when the most amount of pilgrim footfall is recorded. However being situated at a height as the sun sets the weather turns cool to cold.

Travelling on the hills during the monsoon months of July to September are considered to be risky business due random landslides that gets triggered in the region accompanied with heavy and torrential rainfall. However if you can manage then you can definitely travel in between the windows of sunny days. This will also ensure that you are visiting during a time when the crowd is less.

During the winter months of October to February the entire region gets completely covered in snow which disables the travelling routes. Once the temple Kapat shuts down for Darshan after the idol of the presiding deity is transferred to his winter home in Ukhimath, visiting Kedarnath is shut down for 6 months when the temperature also goes till subzero levels.

The summer months of May to early July are considered to be the best time to visit Kedarnath when the temperature is pleasant and comfortable to travel. This is the time when the pilgrim footfall is at the highest. The winter months of late September to November are also considered to be a good time to visit Kedarnath if the Himalayan winter chill does not bother you.