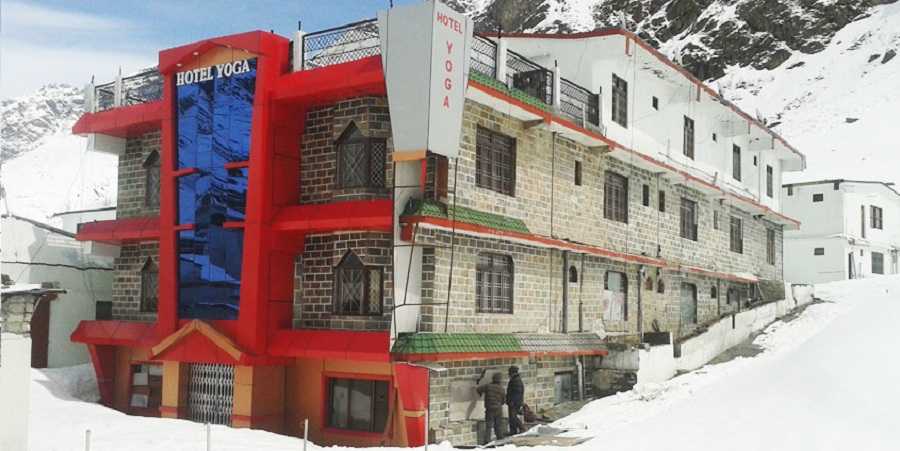 Overview
Hotel Yoga is a prominent hotel, which guarantees a comfortable lodging experience for the devotees. In addition, they can witness the picturesque views of the snow-capped mountains during their visit to Badrinath Dham. It is one of the leading budget hotel which is located just five hundred meters away from the Badrinath temple. The hotel is encompassed by the panoramic landscapes laced with tranquil environment.

Special Offers
The customers could take advantage of the group and corporate tours by submitting an enquiry to the hotel management.

The hotel consists of three bedrooms namely ‘Double bed-room’, which starts from Rs. 2200 per day, a triple bedroom that starts from Rs. 3000 per day and a four bedroom where price begins from Rs.4000 for a single night.

01. Manna Village: – There is a common belief among the people that Pandavas of the famous epic ‘Mahabharata’ crossed along the borders of Badrinath and Mana Township during their journey to Swargarohini. According to Hindu mythology, there is a cave, which is believed to be the spot where Vyas inscribed ‘Mahabharata’.

02. Ganesh Gufa: – Ganesh Gufa, which is situated in the village of Manna, is just stone’s throw away from the Badrinath temple. Vyas Gufa located adjacent to the former Gufa is the spot where Vyas used to relax and describe the epic ‘Mahabharata’ to Lord Ganesha.

03. Vyas Gufa: – Vyas Gufa is a cave where Rishi Ved Vyas composed ‘Mahabharata’. You would come across pictures of Ved Vyas writing Mahabharata inscribed on the walls.

04. Vasudhara Falls: – Vasudhara Falls is located just four kilometers away from the town of Badrinath. Majestic mountain peaks encompass the falls with waterfall racing down in a series of cascades.

05. Satopanth Lake: – Satopanth is a triangular lake, which is situated just twenty-five kilometers away from the historic Badrinath town. According to legends, three major super-powers ‘Brahma’, ‘Vishnu’ and ‘Shiva’ occupy on either corners of the lake. The tourists are requested to carry their essentials such as cooking pan, stove, woods, fire and water.

06. Mata Murti Temple: – Mata Murti Temple, which is, located just three kilometers away from Badrinath is dedicated to Holy deity Lord Narayan. According to Hindu mythology, Mata Murti offered prayers to Lord Vishnu in order to give birth to his next avatar through her womb. Lord Vishnu accepted her wish and born as twins named Nar and Narayan with the objective to exterminate a monster. This temple is also a primary venue for hosting its annual fair, which is held during the month of August.