Yamunotri Dham is situated amongst the lush green lap of the Garhwal Himalayas on a flank of Bandarpoonch Parvati. Due to its jagged terrain and rough trails the temple can only be accessed by covering a walking distance of almost 7 kms. The overall ecosystem of Yamunotri is filled with different types of tall green trees like that of coniferous, oak and deodar that coexists peacefully in high altitude regions. The climate of higher Himalayas is very different from the rest of the part of India and the plants, fishes and animals residing here are unique. From the glaciers to the high snow-clad peaks the experience here is unreal and will never fail to surprise you. It is very important for you to know about the geography of any place you are going beforehand so that you are able to depict what kind of a weather it would be and pack your bags according to that.

The ecosystem of Yamunotri is balanced due to its coexisting collection of various different species of flora, fauna, birds and even fishes contribute to making Yamunotri a stunning spiritual destination.

Flora – The overall forest cover in the district of Yamunotri is almost 80% which is home to so many species of trees and wildly occurring flowers that it is difficult to even keep an exact track. But some of the commonly occurring plants and flowers are – blue poppy, blue / red / pink / white rhododendrons, medicinal herbs etc.

Fishes (in Uttarkashi) – The river flowing harbor some commonly occurring high altitude fishes such as snow trout, brown trout, Mahseer among a host of other indigenous and exotic fish collection. These fishes are found in lakes in lower altitudes and not on higher ones.

Birds – The bird variety is scattered depending on the altitude of the mountain in an area. Some of the most commonly sighted birds that is a part of the ecosystem of Yamunotri are Kalij, Kokla, Chir etc. you can spot Monal also due to its metallic green color, along with purple and some red and jet black color as well.

One cannot put into words the magnitude of thriving ecology that encapsulated Yamunotri.

About Source of Yamuna 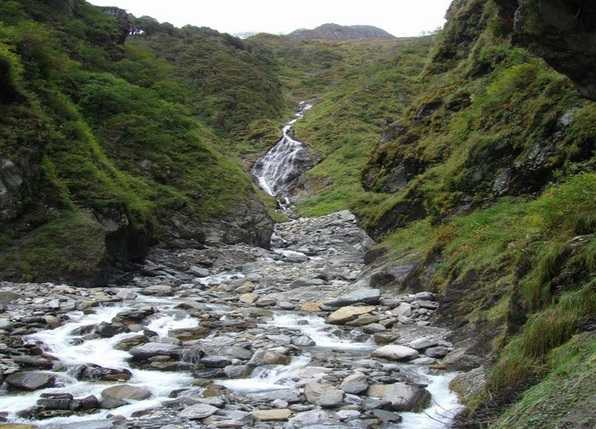 Situated in the Kalind Himalayan mountain range on a whopping elevation of 14,509 feet is Champasar glacier which feeds the Yamuna River. The route to Yamunotri temple is in itself a difficult one so reaching its source is an impossible task. The temple of Yamunotri marks the final accessible point to the river of Yamuna which then flows on for 1,376 kms while finally exiting Uttarakhand at Dhalipur. This source is located at a distance of just 1 km ahead the main temple of Yamunotri and is host to a thriving natural environment. The route to the glacier can be followed on a given trail which makes its way to the glimmering Saptarishi Kund which can be reached with the help of a local guide.

Literally translating into ‘tail of a monkey’, this mountain massif is situated in the Garhwal division of Uttarakhand and is considered to be the abode of Kalind Parvat which serves as the source for river Yamuna. A widely popular historical account about this place dates back to the time of Ramayana. The Parvat earned its name from the time when after burning down Lanka to ashes Hanuman Ji flew to Bandarpoonch Parvat to extinguish the fire burning his tail. This mountain range is also strategically situated right on the western edge of the higher Himalayan ranges where it turns towards the northwest region. The snow clad mountain is also a part of the Sankari range which lies inside the famous high altitude Govind Pashu Vihar National park and Sanctuary.

Currently with rapid development programs focused on the increasing amount of pilgrimage tourism in Chardham Yatra sites of Kedarnath, Badrinath, Gangotri as well as Yamunotri is causing some major imbalance in nature. The excavations are caving in the mountains and roads and it is also causing a rapid change in the climatic conditions and increasing the effects of global warming in this region. All this is also causing the Champasar glacier source to recede. The need of the hour is primarily to regulate the pilgrim footfall here in a way that benefits the pilgrims without disturbing the natural balance of nature.