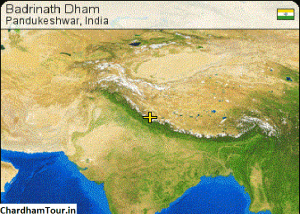 We all know that Badrinath Dham is situated among some of the most pristine natural beauty of Uttarakhand on the lap of the peak of Neelkanth. Once you reach here you will be able to indulge yourself in some of the most stunning beauty and spirituality that is unmissable here. The district inside which the temple is located (Chamoli) the temple seems to be sandwiched between two lush green mountains with the holy river of Alaknanda gushing her way through the valley. You should keep in mind the geographical and relief features of anywhere you are going in order to draw up a picture of the difficulties that you might be facing on your holy journey:

Forming the backdrop of Badrinath Dham are the twin peaks of Nar and Narayan which adds on to the picturesque beauty of this holy place. According to Hindu mythological accounts, when the peaks of Nar and Narayan implode into each other all the paths leading up to Badrinath will be completely closed off and the pilgrims wanting to offer their prayer to the lord will then be making their way to Bhavishya Badri. The temple is perched on an elevation of 3,133 metres above sea level a visit to the temple is relatively easy as compared to Kedarnath Dham, since the taxi and cars can be easily accessed and they stop in close proximity to the entrance of the temple.

If you have some time in hand during your visit to Badrinath then you should definitely explore the beautiful surroundings. These places are mostly high altitude hilly terrains consisting of gently rolling hills, lush green meadows with tall trees and forests of deodar along with opportunities for you to indulge in some fun outdoor activities like camping and trekking or hiking.

Alaknanda River and its Origin:

The holy river of Alaknanda makes it’s way gloriously through the valley of Badri and from right next to the main temple. Its source can be traced back to the glacier of Gaumukh which is at a journey distance of almost 13 hours. The river water is extremely playful in nature and come gushing down the valley. There is an interesting story regarding its origin which can be dated back to the time of king Bhagirath. He had gone to Gangotri Dham to pray for the descending of river Ganga and ask her to grace the earthly realm with her presence since this was the only river where his ancestors would attain salvation. He performed deep penance and meditation for years on end and finally after listening to his penance and hard work the river decided to make her way to earth via the matted hair of lord Shiva. However the force with which the river would make her way would have the potential of completely destroying the earth so it divided itself into 12 different tributaries of Ganga, Alaknanda being one of them. This fact had added on to the mystical and spiritual vibe of the entire region of Badrinath.

Peaks of Nar and Narayan:

Dividing the peaks of Nar and Narayan mountain range is the gushing river of holy Alaknanda and forming its backdrop is the Neelkanth Peak which is a part of the Narayan mountain range. These mountain ranges are named after the twins Nar and Narayan who are responsible for inculcating the ritual of Guru Shishya, had decided to make Badrinath their sole place of performing mediation and penance. An historical account suggests that Lord Vishnu himself had appeared in front of them and had promised them to make Badrinath Dham his permanent abode on the requests made by the twin brother. Geographically speaking these ranges have jagged green slopes and overlook the entire town in a majestic manner. Its higher parts remain covered entirely in snow throughout the year and present the perfect picture to the visiting pilgrims.