Gangotri Dham is a crucial part of the Chota Chardham Yatra circuit which takes place every six months in Devbhoomi Uttarakhand. People from far and wide make it a point to visit this rare temple dedicated to goddess Ganga. With the roaring Bhagirathi River making its way from the side of the temple, this place is replete with tales from the ancient ages and these stories and mythological account adds on to the enchanting charm of this place. The temple is rich in historical and mythological accounts which can be felt right from the moment you step into the temple’s perimeter. It is believed that taking a dip in the water from here will ride you of all your sins and will grant you salvation.

Here is some more information about how the temple came into being and the incredible and legendary history around it:

The Story of King Bhagirath 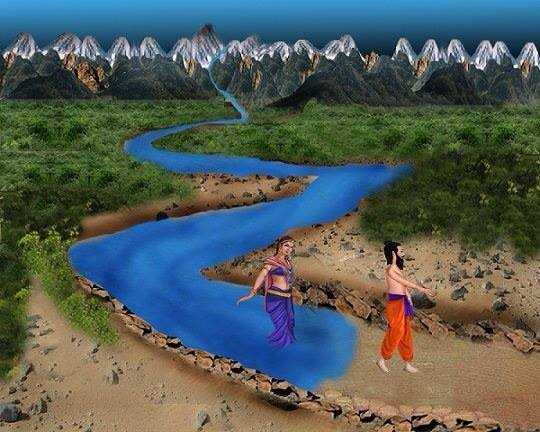 The story of Ganga goes back to many ages ago when Ganga River was not flowing on earth. King Sagar had decided to perform a massive Ashwamedha Yajna where his horse and his 60,000 sons (born to queen sumati) had to be slain by him. Indra dev became insecure thinking that if the yajna was a success he would lose his throne. With this in mind, he tied up the Ashwamedha horse to Sage Kapil’s ashram. The king sent his 60,000 sons looking for the horse. They interrupted the meditating sage who was so angry that the moment he opened his eyes all the sons were perished and only their ashes remained. He cursed that their souls will not find salvation until their ashes are washed away by the heavenly river Ganga. Later on, king Bhagirath (king sagar’s grandson) performed deep penance and meditation to goddess Ganga asking her to descend down to the earthly realm from heaven. After years of continuous and intense penance Ganga finally made its way to the earthly realm, granting them salvation or moksha. Ever since then people have been immersing the ashes of their departed ancestors in the waters of this holy river.

The establishment of the temple structure of Gangotri Dham can be traced back to the time of Gurkha leader Amar Singh Thapa. He kept in mind the fact that the road reaching up to the temple is extremely steep and difficult to cover, he got it repaired. Amar Singh Thapa is also responsible for repairing the Julapul or the ropeway bridge in Bhairon Valley. Just like in Yamunotri, there was no temple located one the head of river Bhagirathi and Amar Singh then decided to donate his hard-earned 400 rupees to get the temple built. Katyuri architectural style was utilized to build the temple and 3 or 4 huts were also built out of woods along with it for the pilgrims. In case there was a crowd the pilgrims would stay in the nearby caves. Before the arrival of Amar Singh Thapa here, the Khas Budhere belonging to Dharali were the appointed priests here and he then later on handed over this priest hood to the Kedar Dutts, the forefathers of the current panda family. The lands from village Mukhwa and Dharali were also donated to Gangotri temple.

The source of Bhagirathi River can be traced to its terminus in Gangotri glacier. Also names as Gaumukh due it resemblance to a ‘cow’s mouth’, this glacier is over looked by its parent mountain peaks of Chaukhamba, Shivling, Thalay Sagar, Meru and Bhagirathi. From the main town of Gangotri Gaumukh is located at a distance of 19 kms and attracts a huge number of travellers, adventure seekers and outdoor adventure sports lovers from across the nation. This glacier is also a traditional and long term Hindu pilgrimage spot where people visit to collect the holy Ganga water since it is believed that keeping this at home showers good luck. The entire region of Gaumukh is completely barren and cold without the presence of any vegetation, plants or even trees. However, the path leading up to the source will take you across some of the most scenic and pristine meadows which cannot be found or experienced anywhere else in India.