Rudraprayag – One of the Panch Prayag

Home » Rudraprayag – One of the Panch Prayag

Also known as the holy abode of Lord Shiva, Rudraprayag is one among the five holy confluence of the roaring Alaknanda River and is named after the mighty Hindu god Lord Shiva. This spiritual place is located in the state of Uttarakhand and at the holy confluence of the two majestic rivers Alaknanda and Mandakini. This beautiful town in the Rudraprayag district is believed to be established on the 16th of September 1997. Your visit to this spiritual town makes you learn the humbleness and the simplicity of the rural life which also represent the humility and charm of the cultures followed in Uttarakhand. Also, how can we even ignore that the prime destination of Shiva worshippers, Kedarnath is situated in the same district which obviously enhances the religious belief of this region? But the charm of this beautiful district doesn’t end here, it also provides a perfect trail to enjoy some adventures like trekking at Chopta – Chandrashila and Deoria Tal. Adventure enthusiasts can enjoy under starry sky camping and on the lush green meadows adorned with colorful flowers. It is very true to say that Rudraprayag is the perfect place for all kinds of tourists whether they are nature lovers, adventure enthusiasts, solo travellers, and tourists on a spiritual tour. 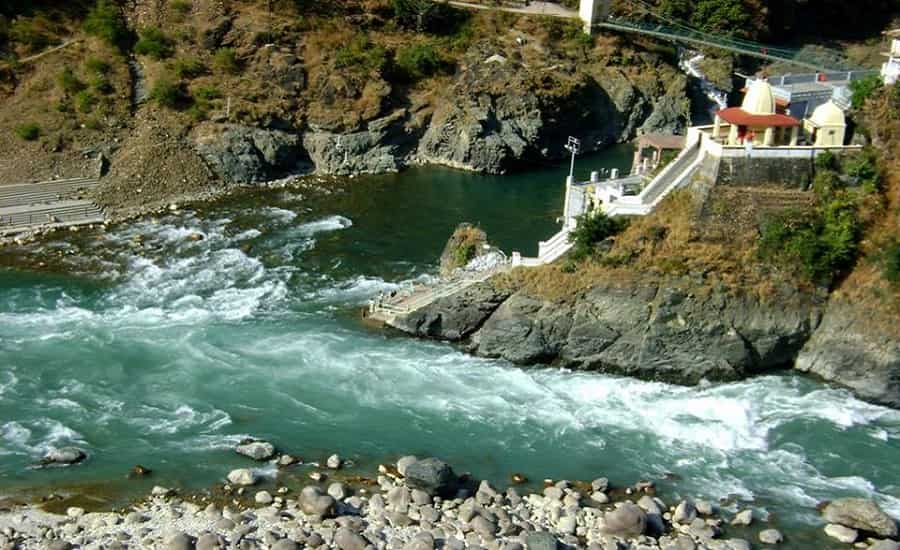 Earlier this hill town was collectively a part of three different regions namely Tehri, Chamoli, and Pauri. But after some years in 1997, Rudraprayag emerged and declared out as a separate district which had been emerged out from the Kedarnath Valley along with some regions of Tehri and Pauri districts.

Legend 1– According to Hindu mythology and locals believe, Rudraprayag is the same place Lord Shiva had appeared as Rudra in front of Narada. Narada had performed a deep penance to please Lord Shiva.

Legend 2– There is another interesting story which behind the origin of Rudraprayag which states that after the tragic death Sati took rebirth here only.

Seated at an elevation of 610 meters above the sea level, Rudraprayag is situated around 34 km away from the beautiful district of Srinagar. The two revered Dhams of Char Dham Yatra are connected with Rudraprayag via two diverted roads- one which goes to Sri Badrinath via NH 58 and the other one which goes towards Kedarnath via NH 109. Therefore, it is called as the stopover of the pilgrims moving towards the shrine dedicated to Lord Shiva and Lord Badri (Vishnu).

Another religious place Agastyamuni is also located nearby this district. It is believed to be the same place where Rishi Agastya did meditation for a number of years and this is how the place got its name and also the religious significance.

How is Rudraprayag Associated with Char Dham Yatra?

Kedarnath which is one of the pilgrimage sites of Char Dham Yatra has located around 86 km from the hill town of Rudraprayag. The district has also been emerged out as a stopover while proceeding towards Kedarnath. The next pilgrimage to be covered in Char Dham Yatra is Badrinath which can be easily be accessed via Chamoli – Joshimath road.

Nearby Places to Visit in Rudraprayag 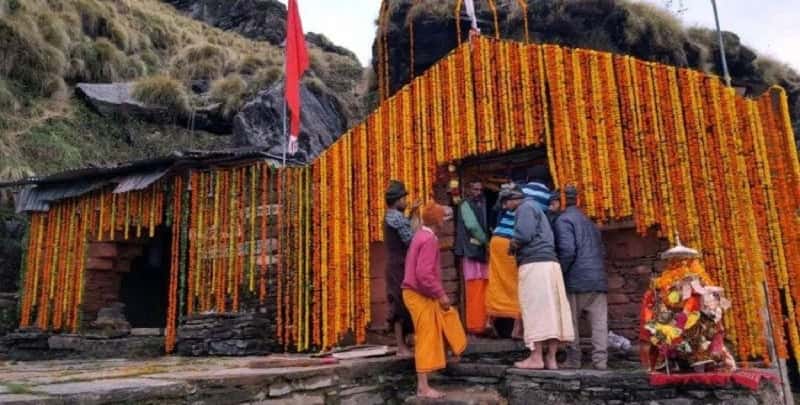 The district is named after Lord Shiva and so it houses a huge temple Rudranath Temple which is dedicated to Lord Shiva and is a must visit place in Rudraprayag.

Another ancient temple in the district which was established centuries ago. Hindu mythology states that Pandavas came at this place for the penance after getting burdened with the guilt of fratricide. There are some amazing and intricate carvings done on the walls of the temple which shows the Shiva Parvati figurines and Terracotta style seals.

Established at the confluence of another holy river Chamunda, Chamunda Devi Temple is the shrine where Chamunda who is the wife of Lord Rudra is being worshipped in this temple. 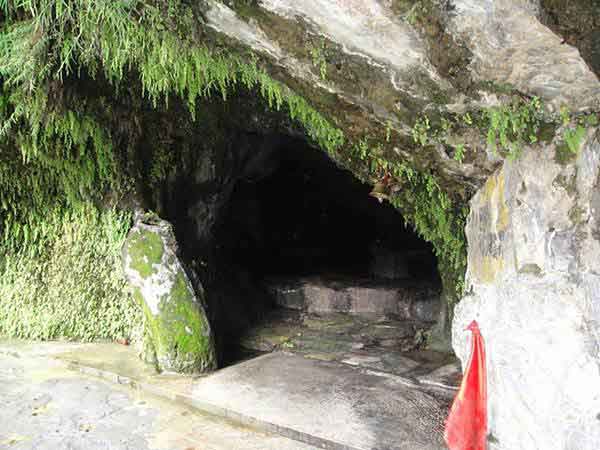 likewise other temples in the Rudraprayag district in Uttarakhand, Koteshwar is also a temple which is dedicated to Lord Shiva. The temple is built inside the natural caves. The temple looks more stunning on the day of Maha Shivratri which is celebrated with great splendor in Koteshwar.

Things to Do in Rudraprayag

Nature Walks: A walk through the narrow lanes of this beautiful area leaves the tourists mesmerized with its unexplainable scenic beauty. It seems impossible to resist the idea of exploring this stunning place along with the natural beauties of the dense forests, lush green meadows, snow-peaked mountains, colorful flower gardens, etc.

Village Tourism: On your visit to this quaint hamlet in this Garhwal Himalayan Ranges, you get to know the rustic and the beautiful life of the villagers, and also their cultures, arts, and traditions.

Religious Significance: Situated on the confluence of two holy rivers Mandakini and Alaknanda, Rudraprayag is located on the way leading to Kedarnath. Also, this beautiful hamlet is home to numerous temples dedicated to Lord Shiva and others. All these make it a wonderful place to visit for the pilgrimage.

How to Reach Rudraprayag?

Rudraprayag also is known as the land of serene sea and the mystic temples can be accessed by the tourists via any mode of transport air, road, and rail. So, it is not going to be difficult for a tourist or a pilgrim to reach this pictorial wonderland in Uttarakhand.

By Air– Jolly Grant Airport in Dehradun is the closest airport to Rudraprayag which is established around 156 km away from the spiritual town of Rudraprayag. One can easily hire a taxi or a cab from the airport to reach any of the places in Rudraprayag.

By Rail– Rishikesh is the nearest railhead to Rudraprayag which is located at a distance of 141 km from the destination. The tourist who is coming from the other major cities of India should get-off at the Haridwar Railway Station which is around 20 km more far from the Rishikesh railhead and is also the major railway station in India. From Rishikesh Railway Station, it is easy for a pilgrim or a tourist to get a cab or a private taxi to reach Rudraprayag.

By Road– There are regular and frequent buses plying from Delhi and the other major cities in the state like Haridwar, Rishikesh, etc to Rudraprayag. If you are coming from Delhi or other cities then you can deboard at Haridwar or Rishikesh and then take the other bus to reach the destination.

This religious town can be visited all throughout the year as there is not much difference in the climatic condition of the place in different seasons but still the best time to visit Rudraprayag district is between the months of November and June. During these months the hill town welcomes a great number of tourists with the most pleasing and favorable climate along with the beauty and the serenity spread in the ambiance.

The Weather of Rudraprayag in the Summer Season

The temperature is moderate in this season and ranges between 20 degree Celsius and 36 degree Celsius. This is the most ideal time to explore the religious as well as the scenic places in the district. It is easy and most comfortable to visit all the places near Rudraprayag in the summer season as the area witnesses negligible hindrance in the path of tourists. Enjoy your Rudraprayag excursion in the bright shining sky along with the cool salubrious breeze.

Rudraprayag in the Monsoon Season

Witness the changing of sky colors and swaying trees accompanied by the rainfall. The entire district is scented with the soul-soothing aroma of the soil and the pleasing weather with the downfall in temperature (21 degree Celsius to 27 degree Celsius). However, you are advised to get updated with the weather forecast to keep yourself away from the hurdles. The region gets affected with the landslides and so the roadblocks during the monsoon months.

Rudraprayag in the Winter Season

The perfect season to enjoy the snowfall and to play with snowballs. The temperature in Rudraprayag goes minimum to a sub-zero level sometimes and result in the monkey brass weather. So, it is advised to carry enough woolens to stay warm and fit in the winter months.

Rudraprayag houses a number of staying options for the tourists ranging from low budget guest houses to resorts. The hotels are flooded with tourists during Char Dham Yatra and so it is hard to find an accommodation in Guptkashi and Sonprayag, so tourists intend to stay at Rudraprayag which is less crowded as compared to these two places. The extensive list of accommodation in Rudraprayag consists the places which not only welcomes you with a warm heart but also offers you the panoramic views of the valley. Hotel Mandakini, Hotel Tulsi, Hotel Suri, and Hotel Pushpdeep Grand, etc. are some of the most famous hotels in Rudraprayag. Apart from these registered hotels, you can also approach the locals who welcome tourists as their homes which is quite a comfortable and pretty staying options.

Although it is not easy to find a decent restaurant in this quaint hamlet you can try the local food and the roadside eateries which attract the tourists with their mouth-watering fragrance spread in the environment. If you love north Indian and Chinese cuisines then it is quite worthy to try out the local eateries at the roadside food stalls. How can you miss out tasting the local cuisines including various types of Pahadi dishes like Sisunak Saag, Kappa, Chainsoo, Gahat ki Dal, and many more? Locals have made it their business and a way to earn their livelihood by serving some lip-smacking delicacies to their guests at their in-house restaurants.