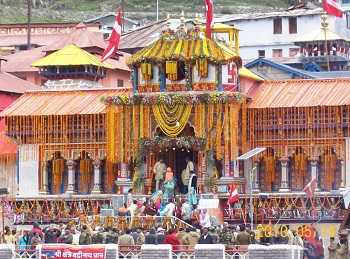 The Yatra to the holy town of Badrinath is smoothly continuing through the foot routes and the helicopter services. On Sunday 1520 devotees reached Badrinath Dham. Post the breakdown of the elephant mountain of Vishnuprayag the highway had been obstructed. Work is now in progress to reconstruct the highway and clear the rubble. The BRO Boulders are now being broken down for the construction of a temporary road which can facilitate tourist and pilgrim traffic.

Reports say that 100 meters of the road has been reconstructed. More than 5 machines have been deployed to clear the rubble. The big boulders have increased the difficulty faced by BRO. The BRO is still trying its level best to use constrained explosives to break down the boulders and make the temporary road. The weather problems are also creating issues for the reconstructive work. The work has started last Sunday since 6 A.M in the morning and it continued till late evening. In Joshimath there us a temporary helipad based in Ravigram and this has operated 30 shifts till now transporting 143 pilgrims. 144 pilgrims have reached Joshimath through Govindgram. The helicopters waited for a long time till 2 pm when the pilgrims were able to reach Joshimath Helipad. The devotion and faith of the pilgrims when they embark on the holy journey of Char Dham is really inspiring.

After a foot walk of 2 km from the Joshimath Marwari, 1377 pilgrims were facilitated to reach Badrinath from Vishnuprayag. The manager of the Bus Depot of Temple Committee Badrinath Kedarnath; Kedar Singh has stated that 1800 pilgrims had made it back safely from Badrinath Dham.
New Source: https://www.jagran.com/