Every Vishnu Follower Must Know These 10 Things About Badrinath

Home » Every Vishnu Follower Must Know These 10 Things About Badrinath

1:- Badrinath is both a part of Bada Chardham (which are at four corners of India) and also of Chota Chardham (which are within Uttarakhand). There is a local proverb regarding the greatness of Badrinath. The implication of the proverb is that one who viewed Lord Badrinath even once never comes back to the mother’s womb, meaning that the holy view of Lord Badrinath gives Liberation from the Cycle of life and Death. For this reason, the scriptures recommend visiting Badrinath at least once in a lifetime. 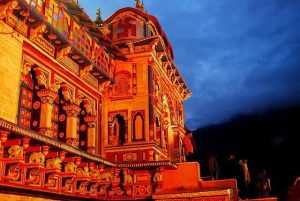 2:- Alakananda River flows by the side of Badrinath as if washing away the holy feet of the Lord. The scriptures mention that in Satyug every organism could have the holy view of Lord Badrinath’s own cosmic image, in Treta Yuga only pious hearts like saints and hermits, and in Dwaparyug when Lord Krishna, the incarnation of Lord Vishnu, took the mortal form he declared that in the next Yug only the idol could be viewed.

3:- The scriptures mention Badrinath Dham as the second ‘Vaikuntha’ (the abode of Lord Vishnu). ‘Ksheer Sagar’ (the Milky Ocean) is one Vaikuntha and the other is Badrinath. It is believed that Lord Shiva used to reside here but Lord Vishnu sought this land from him.

4:- Chardham Yatra starts from Gangotri from where the turbulent Ganga River emerges and ends at Badrinath. Badrinath is situated in between two mountains – Nar and Narayana. It is believed two hermits named Nar and Narayana, both incarnation of Lord Vishnu in Satyug, meditated here who were born as Arjun and Krishna in Treta Yuga. 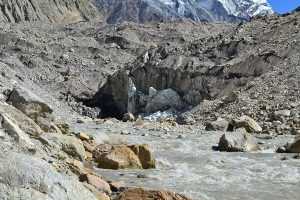 5:- The second spot of the Chardham Yatra is Yamunotri. There is a temple of River Yamuna here. After that, it is Kedarnath and then Badrinath. It is seen that when the door of the last two shrines open, there is a glowing lamp in each which burns for six months. It is believed that the gods light the lamp when no human can stay in the frigid weather.

6:- It is believed that the Narasimha Temple in Joshimath has connection with the Badrinath Temple. One of the arms of Narasimha is thinning away slowly but gradually. The day it breaks, local believe that the Nar and Narayan mountains will merge and there will be no view of Lord Badrinath thereafter.

7:- There is an interesting story behind the name ‘Badrinath’. Once, Devi Laxmi got angry with Vishnu and left for her father’s house. Later, pacified when she returned, she saw Lord Vishnu meditating in a forest of ‘Badri’ (jujube berry) trees. Amused, she named him Lord Badrinath.

8:- This Saraswati Temple is situated at the origin of River Saraswati near Mana Gaon which is situated 3 km from Badrinath. This river flows for a while and then vanishes into Alaknanda River. It is a common belief that one day the present Badrinath will also vanish and reappear at Bhavishya Badri.

10:- The high priest of Badrinath is from the clan of Adi Shankaracharya. He is called ‘Rawal’. During his span as a priest, the Rawal cannot marry and has to be celibate. For them, even the touch of women is considered sin.